“And…action!” Shooting takes place for one of the short promotional films for the ttff/10

As preparations for the ttff/10 kick into high-gear, blogging has of necessity taken a back seat. Things will pick up closer to the start of the Festival, but for now I’d just like to say a bit about our youth film concept initiative.

This year, for the first time, the ttff decided to hold a youth film concept initiative. Presented in association with RBC/RBTT, our newest supporting sponsor, the the idea behind the initiative was two-fold: to elicit concepts for a series of short promotional films for this year’s Festival, as well as provide a helping hand to youngsters (28 years and under) interested in becoming filmmakers.

The initiative asked entrants to come up with as many concepts as possible for a 30- or 60-second film based on the ttff’s theme, “You’re in Focus”. There was the stipulation that concepts were not to contain any dialogue.

Of the entries received, four winning concepts were chosen, one of which is being used used to create the official trailer for the ttff/10. The winners were all invited to participate in the production of their concepts, which is being handled by the ttff. Shooting took place earlier this week, and the films are expected to be finished by next week.

The winners will also receive cash prizes of TT$3,000 each, which will be presented at the awards ceremony for the ttff/10, on October 3 at the Carlton Savannah.

The films of the winning concepts will be screened in the run-up to and during the Festival. Look out for them at the various MovieTowne multiplexes, on FLOW, on Gayelle the Channel, and throughout the country at select venues. Of course, they will also be posted online. 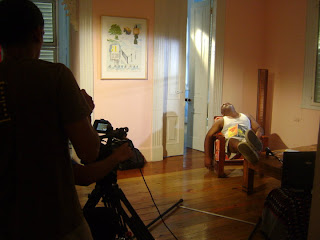 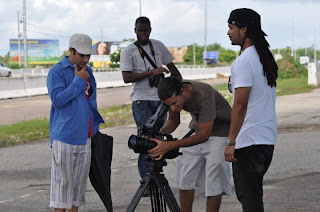 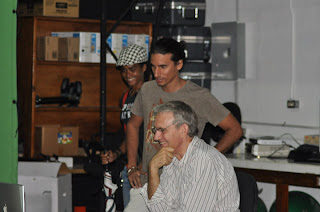 From left: production manager Princess Donelan, director Ryan Khan and ttff Director Bruce Paddington review footage from one of the days of the shoot