We’re delighted to announce a new ttff initiative, Limin’ Live – an informal, 20-minute, one-on-one chat, with creative and film industry folks, about the art, business, joys and challenges of working in film and television. Limin’ Live will take place every Monday at 5pm AST on Instagram live @ttfilmfestival, and subsequently made available on igtv. We hope the chats will be inspiring, entertaining, and interesting to a varied audience of creative practitioners in the Caribbean.

Ian Harnarine’s films include work for TED and Sesame Street, one of which earned an Emmy nomination. Harnarine’s film Doubles With Slight Pepper, executive produced by Spike Lee, won the Toronto International Film Festival and the Canadian Academy Award. Caroni, the story of a West-Indian domestic worker in New York premiered at the Toronto International Film Festival and continues to be screened at festivals around the world. Harnarine is currently adapting David Chariandy’s landmark novel, Soucouyant and a feature adaptation of Doubles With Slight Pepper.

Ian was selected by Filmmaker Magazine as one of the 25 New Faces of Independent Film, profiled in the New York Times and named one of Playback Magazine’s Ten to Watch. Ian has a MFA from New York University’s Graduate Film School, and is a member of the National Board of Review, Academy of Canadian Cinema and Television, and the Television Academy.

Tune in to IG Live at 5pm AST on Monday 01 March for limin’ live with Ian Harnarine!

limin’ live is brought to you with the support of Republic Bank Limited. 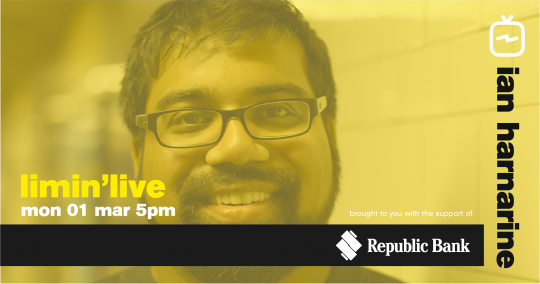