Coming off an extremely successful 2013, the trinidad+tobago film festival (ttff) kicks off its programme of events for the new year with its Carnival Film Series (CFS).

Now a firm fixture on the annual Carnival calendar of events, the CFS, in its fourth year, is a showcase of films about Carnival and its related artforms.

The series is sponsored by the Trinidad and Tobago Film Company (TTFC) and the National Carnival Commission (NCC). Technical support is provided by North Eleven, the ttff’s media and projection partner.

This year the CFS takes place over six nights in February. Two of these nights will be given over to presentations by renowned calypso, pan and mas researcher and historian Ray Funk.

These presentations follow on from Funk’s extremely popular presentation at last year’s CFS at NALIS in Port of Spain, and will again feature vintage Carnival footage, much of it never before seen in T&T.

As ever admission to all screenings is free of charge. There will be refreshments on sale, and giveaways. All events begin at 7pm.

Between the Lines
Director: Abigail Hadeed
2012/T+T/Experimental/3mins
An exploration of the frenzied, chaotic, moving shadows cast on the roads by moko jumbie Carnival characters.

And They Say, Don’t Play with Poison
Director: Natalie Wei
2006/T+T, Canada/Experimental/3mins
An examination of notions of gender, identity and belonging in the contemporary Carnival.

Beneath the Mas
Director: Dinesh Maharaj
2014/T+T/Documentary/10mins
A look at some traditional mas-making techniques and Carnival characters, particularly the art of wire-bending, the fancy Indian, the jab jab, the midnight robber and the bull mas. (Production sponsored by NCC.)

Kings of the Gayelle
Director: Christopher Laird
2014/T+T/Documentary/11mins
A portrait of two stickfighters, King Kali and King Tony, who have distinguished themselves in the discipline of Kalinda. (Production sponsored by NCC.)

Dance de Calypso
Director: John Barry
1996/T+T/Documentary/46mins
An exploration of the history and evolution of the different ways people dance to calypso music.

y-ning?
Director: Emilie Upczak
2010/T+T, USA/Documentary/13mins
An “academic music video” that explores wining as a dance language with a history and identity born out of the Caribbean experience.

After Mas
Director: Karen Martinez
2013/T+T, UK/Narrative/20mins
A story of love that flourishes under the cover of darkness during J’Ouvert on the streets of Port of Spain. In the cold light of day, will these young lovers from very different backgrounds stay true to their desires?

No Bois Man No Fraid
Director: Christopher Laird
2013/T+T/Documentary/72mins
Keegan Taylor and Rondel Benjamin are young martial arts experts from Trinidad and Tobago. In this uplifting and eye-opening documentary, they embark on a discovery of their roots by setting out to learn the local martial art of stickfighting. In the process, they receive guidance from living legends such as Congo Bara, King Stokely and King Kali, and set out to compete in the annual national stickfighting championships.

A presentation by Ray Funk

A presentation by Ray Funk

Image: a still from Between the Lines 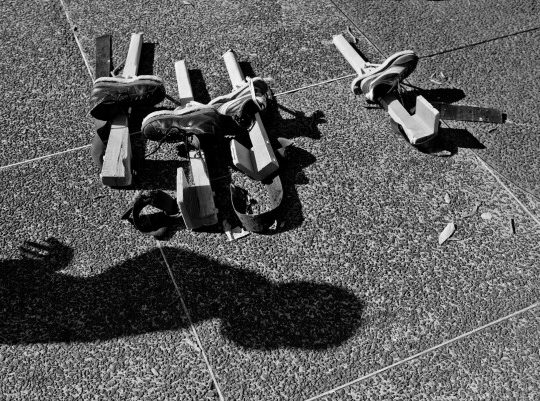