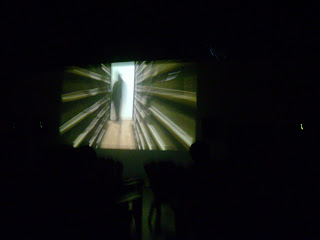 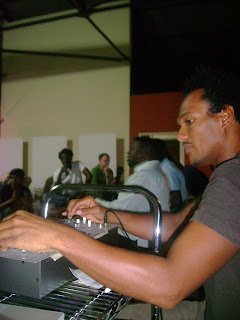 After Wednesday night’s spectacular (and at times sweaty) opening of the Trinidad and Tobago Film Festival, a large crowd gathered at the Studio Film Club in Laventille for the first of two nights of films by award winning British film maker Isaac Julien.
Derek is Julien’s beautiful, moving portrait of the late artist, film maker and AIDS activist Derek Jarman. The film is narrated by Jarman’s closest collaborator, celebrated English actor Tilda Swinton.
Just off a flight from London, Julien expressed excitement at being in Trinidad for the Film Festival at the SFC which is run by Peter Doig an old school mate of his from Central St. Martin’s College of Art and Design.
SFC-ers stayed around after the film to ask Isaac about his work, the triumphs and challenges of storytelling in the film medium and how he thought Caribbean audiences would respond to his work.
Next week, SFC will be screening a selection of Isaac Julien’s short films including Paradise Omeros based on some of the poems of Derek Walcott.
Screenings at SFC are free.