Caribbean filmmakers very rarely get the opportunity to meet and interact in an informal setting; at film festivals around the region, filmmakers often congregate amongst their country groups, and industry associations and groupings tend to be localised. CARIFESTA is an opportune moment to have a gathering of filmmakers from the region, as many will be traveling to Trinidad as part of their country’s contingent. And within the context of the CARIFESTA celebrations of regional creativity, the FilmTT Filmmaker Networking Breakfast will be a welcome opportunity for filmmakers from around the Caribbean and Trinidad and Tobago to gather, meet and interact in a comfortable and relaxed setting within a structure that is designed to encourage filmmakers to meet peers whom they don’t already know, talk filmmaking, projects, and, hopefully, regional collaboration.

Open to filmmakers with a film in this year’s Festival, film commissioners and film associations.

Look Within: Towards Greater Regional Co-operation and Co-productions

As a region, the Caribbean continues to focus the bulk of its creative and investment energy on trying to build markets internationally, whilst often foregoing the crucial role of the Caribbean region itself as a consumer market with a population of roughly 44,380,000 (including Spanish, French and Dutch Caribbean/ as of 2019). The end result is that, by and large, as a region, we consume products that are produced elsewhere. This is not because there is a shortage of creative people ready and eager to produce desirable things, but because of a failure of political vision and lack of industry-specific infrastructure and intra-regional agencies with a focus on supporting and developing the creation of business models and strategies that would build opportunities for vibrant regional cooperation, co-productions and distribution.

Supported by FilmTT, Look Within: Towards Greater Regional Co-operation and Co-productions is a panel discussion intended to shine a spotlight on creating opportunities to build co-productions, collaborations and conduct business within the Caribbean creative and market space.

Show Me the Money: Exploring Different Routes to Film Financing

In the Caribbean, financing film projects can be such a challenge that many first- and second-time filmmakers falter at this seemingly insurmountable hurdle, preferring to focus on making short films than features. This panel will explore the different routes available to filmmakers in the region, from crowdfunding online to accessing grants and public funds and finding/ approaching investors. 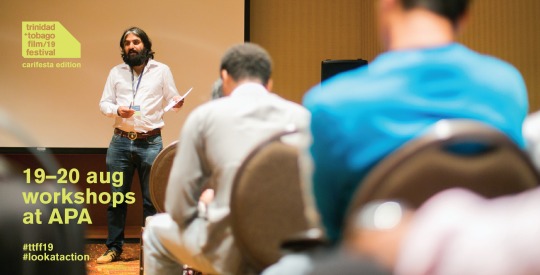