Sweet Micky for President, a documentary about the rise of Haitian music star Michel “Sweet Micky” Martelly to the presidency of his country, had its Caribbean premiere last night as part of the the ttff/15 opening gala. Our blogger, Aurora Herrera, interviewed the film’s producer and star, Pras Michel of the Fugees, and director Ben Patterson after the screening.

How did you get the call to work on this film?
Pras and I both live in New York City, and Pras collects these watches and I happen to do marketing and film work for them. So we got connected through the marketing director randomly in that company and Pras wanted to do a film in Haiti. He wanted to tell a story that hasn’t been told in Haiti and he called me and said “Let’s do something.” Pras was like “Yo man, I’m going to convince this man to run for the presidency of Haiti, this guy named Michel Martelly.” I googled him and all I could find was videos of a dude named Sweet Micky who was dancing in diapers. I called Pras and said, “Yo, I got this dude’s name wrong.” But Pras confirmed that was the guy. I thought that was amazing. So at that point we decided to start making the film about this campaign that Pras was essentially leading.

Did you ever have any doubt in your mind about the project?
Well I had a doubt that he would ever win, so we would make a short film about this crazy idea that was these two musicians trying to run for the presidency of the poorest country in the western hemisphere. I didn’t know at that time that Pras had sort of a brilliant insight into how an artist could galvanise the interest of the people. He was really trying to find someone that would be a sybol for hope.

Did you know anything about the Haitian crisis before you started the project?
Only generically, what was on tv which was not enough and had no context. It was just crap, honestly, it didn’t really tell the story, which is why this was such a huge opportunity.

Did you have to get permission to show the footage with Bill Clinton and Sean Penn?
We got all the access because we maintained a very unofficial status. We didn’t really tell anybody we were making a movie because the second you do that you’d have gotten kicked out of the room. But they knew that we were filming something and they acknowledged it so it was fine and we had really great legal counsel and they said that we can use it so that was really helpful. It’s important to tell the story and for anybody who is in the film, it’s like they should give us the right to use it because it’s a benefit to the people who want to know the story and have a sense of what happened.

Did you know that bill Clinton was going to be there to meet Sean Penn?
No, I was just hanging out with Pras and then he leans over and he’s like, “Yo Bill’s coming.” I was like “Who, Clinton?” And then sure enough he shows up. It was surreal.

Visually the film is very engaging. I had heard that you have an advertising background. Has that had a major impact on you as a filmmaker?
Totally. You know in advertising you’re trying to create stuff that gets people’s attention and has a certain pace to it, so in a way I’ve really benefitted from that kind of work. So when I made this I felt most political documentaries are boring in the sense that you have to be really interested in the subject to sit with it. So I wanted to make something that was entertaining and a movie about a place that most people expect to be super depressing and sad and it wasn’t. So those were my goals. I wanted to create a political thriller and a comedy, a tragic situation and a crazy idea.

Tell me about the score and soundtrack.
Paul Brill did the soundtrack who is an amazing composer and then Jerry Wonda who Pras works with on the score did some pieces and then we have Michel Martelly’s music and Haitian music.

Is there anything you want to say to the people of Trinidad and Tobago?
I’m not from the Caribbean but I’ve really fallen in love with this region of the world. I think there is so much to learn from these islands and the history and the struggle and I’m amazed and I just feel like I’ve been privileged to tell this story.

You’ve been doing the film festival circuit for a while now. What’s been your favourite moment in all of it?
Just people enjoying it, seeing people from all walks of life who have no real connection to Haiti, come out and be inspired. I mean this woman who just spoke to me has to be about 60 years old and for her to say that it resonated with her is incredible.

A long time ago you decided that you wanted to do something to help the Haitian people. You lead the campaign for Sweet Mickey and you inspired the masses to make a change. Do you feel vindicated now that you’ve done your part?
There is still a lot more work to be done. We are just taking it day by day and every day is progress. We come to the festivals and there are people watching it and loving it. This is not going to solve all of the issues in Haiti but this will inspire people because when they look at the Haitian story they feel like “This is my story.”

What do you think is the biggest issue in Haiti?
Corruption.

What do you feel is the way to weed it out?
You have to stop democracy. You can’t go to a country that is not used to democracy and give it full-blown democracy. Sometimes you have to start with total rule and then slowly progress away from that. For example, the Domincian Republic, 25 to 30 years ago started off—a lot of people are scared to say this word but—it started off as a progressive dictatorship. When you have people that have been colonised and then you give them freedom, they aren’t used to it and they don’t know what it means. A generation has to get used to what we call civil democracy, learning that you gotta pay taxes, you gotta keep the streets clean, you gotta create education, create jobs, healthcare, create a sustainable economy. I’m not sure how it is in Trinidad but you have two million people? We have 15 million people. You have to tell people how to do things and they don’t get it and those who get a little bit of power, they don’t look to help the people. They try to just keep it and just suck the blood out of the country.

How did you feel when the Dominican Republic asked Haitians to leave their country earlier this year?
It’s a sovereign country. When you look at the DR, they are doing it because the Haitian leadership is allowing it to happen. We gave the DR their independence but right now they are way more progressive than we are. So that means that there is something that we didn’t do right, that the leadership didn’t do right. Do you think that the Dominican Republic, if there were, let’s say ten thousand Americans in the DR right now, do you think they can say, “We are going to kick all of the Americans out?” No. And that means that they don’t respect you (Haiti) because you are a keystone government. So I don’t blame the Dominican Republic, but the leadership of Haiti is selling the country. They give the Dominicans contracts but they don’t give their own people contracts to create jobs! That doesn’t make any kind of sense. I don’t know what kind of philosophy or mentality that is.

Do you think it’s possible for people to ascend to positions of power without falling into corruption? Is it an inherent part of being human to fall prey to greed?
Of course you can. But the thing is that you have to understand that there is something greater out there than you. Also, I’m a firm believer that leaders should not be people who have never had anything. It should be someone who has been successful, who had money because then it’s not about money for them; it’s about legacy. But if you never had money and you’re coming across power and you have access to money and that will lead to greed because you haven’t been through that maturity process. Like for someone like me, I came because it’s not about money. It’s about legacy. That’s the difference.

We got a situation going on in America right now; Donald Trump is on fire. I’m not saying he should be president or not but the reason he is resonating is one, the people love the fact that he is not getting money from corporations. He is using his own money; he didn’t have to raise any money. Number two, it feels like, what else does he want? Right now he is writing his legacy. He wants to be known as the greatest. He is worth about 10 billion dollars. How much more money can he make?

You’ve done music but now you’re a film producer. How has the whole experience been for you and what’s next?
For me it’s been an evolution. I’m going to continue to do more movies, maybe no documentary per se; I’m going into narrative.

As an actor?
Yes, I’m actually developing a couple projects right now. This film is obviously a project very dear to me which I am focusing on right now but next year I’m getting geared up for a full narrative.

In your speech earlier tonight you said “If I wasn’t Haitian, I’d be Trinidadian.” How do you feel about our country?
That was no political bullshit. I’m telling you, I purposely stay away fro Trinidad. I came with the Fugees and with Wyclef but I purposefully stay away because I love it. That’s why I’m only here for two days! I want to make sure I don’t get too comfortable here because I will bring my cars down here and be like, “This is chill!” Trinidad? I love this country. That’s no bullshit. 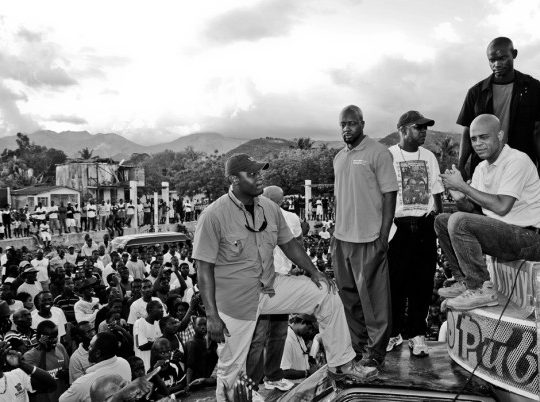