The fiction feature Second Coming, written and directed by Debbie Tucker Green, screened in the Festival’s Panorama section last Wednesday 23 September. Our blogger, Aurora Herrera, attended the screening, where the director was present.

Second Coming has a sensitive, nuanced style of filmmaking. It also expresses the vocabulary of the domestic life of a family more through what is not said than what is.

The story follows Jackie, her husband Mark, and their eleven-year-old son, JJ, who live in south London. To JJ, the routine life of the household provides a safe space for him to enjoy being a kid with no responsibilities. However, Jackie seems off kilter from the very beginning. She is pregnant and she seems to have no idea how it happened. As the story gradually reveals, she and Mark have not been intimate in quite some time.

As each day passes, Jackie recedes further into herself. Tucker Green creates a sense of claustrophobia with tight camera angles. This stifling feeling pervades the household and more and more cracks appear along the fault lines of the family.

The film remains ambiguous as to Jackie’s true state of mind. She does not acknowledge any extra-marital relations but her unwillingness to tell her husband does raise the level of suspicion. Eventually it is revealed that the couple has suffered four previous miscarriages. The audience comes to understand Jackie’s fears about the pregnancy and also about telling her husband.

Scenes of domestic life are juxtaposed with seemingly mystical events. Jackie begins to have what she calls “visions” that begin with a light rain drip-dripping in her bathroom. Tucker Green once again keeps the camera tight, not panning to the roof for the audience to investigate whether the cause might an unfortunate plumbing issue. As her pregnancy progresses, Jackie begins to suffer from nosebleeds and that light drip-dripping rain becomes a windy tempest. Suffice it to say Mark and JJ do not wake up to a flooded house.

The audience is left to question whether these phenomena are really symptoms of an immaculate conception, omens of the second coming or if Jackie is suffering from any cognitive dysfunction caused by a tumor or some other malady. Truly, the success of this film is in Tucker Green keeping allegory at arms length.

“With the nosebleeds and the rain, I told the special effects guys that I wanted to bend naturalism,” Tucker Green said during the Q&A session. “It was just messing with reality instead of taking her out completely from that place. It’s not real, the house isn’t flooding, but we don’t know if it’s in her head and if she is seeing things.”

Despite the colourful interjection of Jackie’s Jamaican family and the spice of their patois, all of the main characters fall into a state of despair, a feeling which Tucker Green conjures with ellipses in conversation, the blandness of not only their domestic space but also of their interpersonal relationships. The muteness of fear defines the experience of the film. Surfeits in conversation would have broken the delicate silence of sadness that grips the audience.

Jackie eventually has the baby, a girl, and we see the family together one year later celebrating her first birthday. In the last moments of the film, something happens that could only be described as a miracle.

When one audience member asked Tucker Green about the psychology of the main female character and what really happened, the director maintained that she prefers to keep the story ambiguous and let the audience work through it for themselves.

“I’ll leave it as ambiguous,” she said. “I’ve got my view but everyone has their view. Nadine [Marshall, who played Jackie] and I know the truth because she can’t play a character and [not] know what was going on but I thought it was definitive.”

Apart from Marshall, the cast features Kai Francis-Lewis (JJ) and Idris Elba (Mark). I felt that the cast was stellar in their respective roles. Tucker Green commented on the casting process.

“We sent Idris the script and he said he liked it but his schedule is nuts,” she said. “The film was already green-lit without him but it worked out. I also sat down with Nadine to talk to her about it. Nadine is a great actress and this film is so much behind the eyes. As for Kai, he was the first child who came through the door but we didn’t cast him [then]. We saw loads [of other boys] and then we decided he was it.”

One of the audience members commented on the cinematography.

“I liked the car scene with the use of the mirrors,” she said. “It was beautiful.”

“The car was interesting,” said Green. “We did quite a few scenes in cars so we did a lot of hunting around for interesting angles.”

The director was also asked about her experience working with the birds that appear in the film.

“Birds and babies you can’t direct but the birds were alright,” she said. “We had to have birds that weren’t so small that the kids would hurt them and birds that weren’t so big they would hurt the kids. The kids had to rehearse with the birds a few weeks ahead. So the blackbird, we had two, the kids called one “evil bird” because it kept pecking them. You can’t see it but they are cuffed and on very long lines so they won’t fly away. It’s fairly straightforward and you have to be very quiet. In postproduction, you have to paint out the pieces of brass that might have shown.” 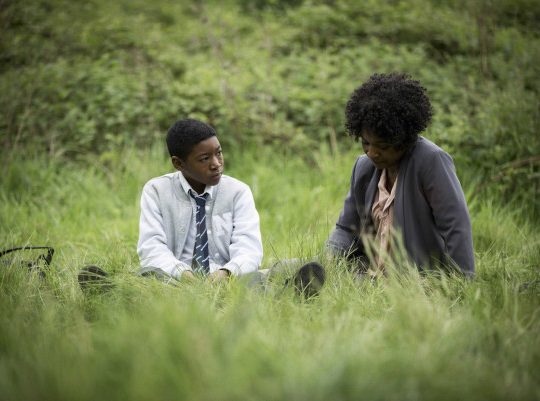