The trinidad+tobago film festival (ttff) is set to kick off its most ambitious community cinema initiative to date, the second annual Community Cinergy series, with ttff leading sponsor bpTT. The series, which will consist of six free events combining film screenings and live entertainment in open-air settings, begins on 26 April and runs until 9 June.

First up is a screening at the Trinidad and Tobago Sailing Association in Chaguaramas on Friday 26 April, of the film Wind Jammers, a ttff/11 selection. Directed by Kareem Mortimer of the Bahamas, this inspiring story tells of a teenage girl who comes of age through sailing.

On Saturday 27 April the series moves to UWI, St. Augustine, where the supernatural thriller Buck: The Man Spirit, directed by T&T’s Steven Taylor, will be shown, along with the Brazilian feature Captains of the Sand. A ttff/12 film, Buck won the People’s Choice Award for Best Short Film. Captains of the Sand—the story of a gang of street urchins in 1950s Bahia—also screened at the ttff in 2012.

Then on Sunday 28 April, award-winning T&T-British director Horace Ové’s classic cricket film, Playing Away, which screened at the ttff in 2008, will be shown at Adam Smith Square in Woodbrook.

A poignant and tender Indian love story, Valley of Saints, follows next, at San Fernando Hill on Saturday 11 May. Written and directed by Musa Syeed, this ttff/12 selection and winner of the World Cinema Audience Award at the Sundance Film Festival is set on the beautiful Dal Lake in Kashmir.

The series concludes with a weekend of family-oriented activities and films at the Buccoo Integrated Complex in Tobago on Saturday 8 and Sunday 9 June. On Saturday there will be a programme of short films, while on Sunday the Cuban feature and ttff/12 selection Habanastation—the touching story of the friendship between two boys from different social classes—will be screened. This event takes place in association with the Healing with Horses Foundation and the Growing Leaders Foundation.

All events begin at 6pm except in Tobago where the start time is 5pm on both days. Admission to all the film screenings is free and food and drink will be on sale at all venues except Adam Smith Square, where audiences are invited to bring their own refreshments.

PLEASE NOTE THAT THE SCREENINGS ON APRIL 27 AND 28 HAVE BEEN POSTPONED DUE TO INCLEMENT WEATHER.

Image: A shot from Valley of Saints 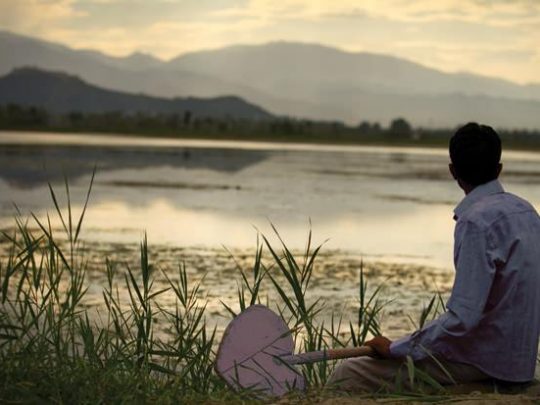