When Calypso Rose visited West Africa several years ago, admiring audiences gave her the name “the Lioness of the Jungle”.

Eventually that name would work its way into the title of a documentary film being made at the time about Rose, born McCartha Lewis in 1940 in Bethel, Tobago.

Entitled Calypso Rose: Lioness of the Jungle, the documentary, which is 85 minutes long, will be screened free of charge by the ttff on Friday 20 June from 7pm, at the Little Carib Theatre in Woodbrook.

The Street Arts Festival is an initiative designed to promote various sectors of the creative industry, including film, fashion, music and the visual and performing arts.

Calypso Rose: Lioness of the Jungle was released in 2011 and is an intimate portrait of an extraordinary woman, the first to win both the Road March and Calypso Monarch (then known as the Calypso King) titles.

Now 50 years into her career, Rose has composed hundreds of songs and recorded dozens of albums, and been an inspiration to countless women calypsonians and soca singers. A number of these women, like Destra and Denyse Plummer, are interviewed in Lioness of the Jungle.

Directed by Cameroon-born, Paris-based filmmaker Pascale Obolo, the film is a travelogue of sorts, tracking Rose from Paris, where she is recording an album, to her native Tobago and Trinidad. The film then follows Rose to New York, where she lives, and finally to her ancestral homeland, Africa, with which she maintains a fierce connection.

Along the way we see many facets of Rose and learn of the great personal struggles she had to overcome, and come closer to understanding the woman behind the powerful public persona. 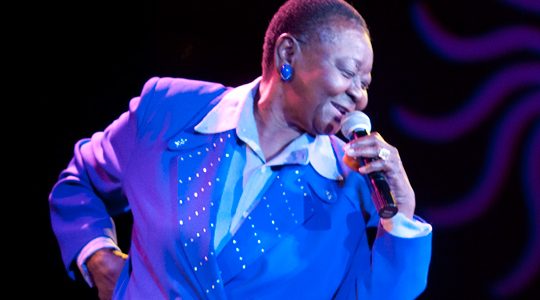