Sanskara: The Hindu belief that our present existence and all related experiences of pain, pleasure, temperance and sin are the result of our past.

Sanskara is a multi-layered work which finds its context in this Sanskrit word. The film, which has been nominated for Best T&T Feature Film, essentially examines the metrical and generational patterns of violence, crime, corruption, familial atrophy and substance abuse.

The film is directed by Christopher Din Chong, an experienced producer and director who has worked for a number of years in the media industry. He established Forward Ever Films and also co-founded C.R.E.A.T.E. Strategies Company Ltd. Sankara is his second feature.

The storytellers utilize voyeurism to offer perspective on right and wrong. Their subject is a boy adopted off the streets by a seemingly innocuous coconut vendor and his equally innocent stay-at-home wife.

The opening sequence evokes a cherry breakfast scene where the mother, (played by the adroit Nicole Wong Chong) and the son (played by new talent Kristof West) engage in a playful food fight where handfuls of flour are the only weaponry. The son eventually goes to visit his father, (played by accomplished performer and actor Kurtis Gross) in his workshop and nonchalantly takes a seat beside a bloodied, hooded captive. Soon enough, the mother comes in and begins to beat said captive for information in front of the young boy who isn’t the least bit unnerved by this occurrence.

According to an interview with The Guardian, Din Chong said that the team wanted to “make the insane and sadistic appear normal.”

As Din Chong pointed out in the Q&A period, “…it may seem exaggerated but if you take out some of the settings, it is based on reality.” One of the audience members thanked the team during the Q & A for doing such a great job “suspending disbelief”.

Without overtly criticizing society for its apparent desensitization to violence, acceptance of the criminal the status quo, the lack of interest in mental health and child abuse, the team is able to set up a war between two families and portray all of the above with graphic sincerity.

To expand the scope of the film, animation peppers the narrative, encouraging the audience to transition from one scene to the next with a new sense of texture.

I have to admit that I did not feel the animation worked as well as it was intended. The transitions did not feel seamless, they were rather jarring, not because of the content but rather due to a divergence of style within the different sequences. I also felt that some of the conversation between characters came across awkwardly.

I thought that the colour palette was well thought out and the overall presentation was reminiscent of Sin City.

Q: How long did it take you to make this film?

A: It took about two years from concept to what you just saw on the screen. Even up to three months ago we were still tweaking certain things. A couple of people were not getting the [animation] transitions so we tried different things and it became what you’ve seen today.

Q: What was the inspiration for making this film?

A: When we were searching for a film concept, we knew we wanted to do something that was entertaining but that also had some sort of social impact. So I listened to stories from a friend and read the newspaper and it may seem an over exaggeration of society but take out some of the settings and it is based on reality.

Q: What challenges did you encounter during the filming process?

A: During production they were very minimal because we planned for months. I had a great production manager, a great producer and the cast was excellent. Post-production is a constant nightmare. With the animation sequences, we didn’t like what we got at first, so we were playing with that motion comic style and then we decided we wanted to go with a choppy style so that took a while.

Q: Who did the animation?

A: We had four different animators worked on it, a bunch of talents came together to produce what you saw on screen.

Q: How old was the child actor?

A: When we cast him he was 13 and during production he turned 14 so there were some scenes like in the strip club of course, where he was not there. We told him to play like he was watching the Disney channel and [act as though] you’re seeing something you like and make some faces showing you like it. It was different to directing a grown up but he was a phemon, easy to work with, no ego or anything and I would work with him again , a million times.

Q: What is the next step for the film?

A: Currently the film is being shown to different criminologists in universities all over the world. We hope that it will lead to some form of discussion.

Q: Would you describe it as vigilante justice?

A: It can be described as that but we tried not to be pretentious or overt ad left it up to the audience to take what they want from it. So if that’s what you got, that is your interpretation and it is on point because it is your perspective.

You can catch another screening of Sanskara at the following times: 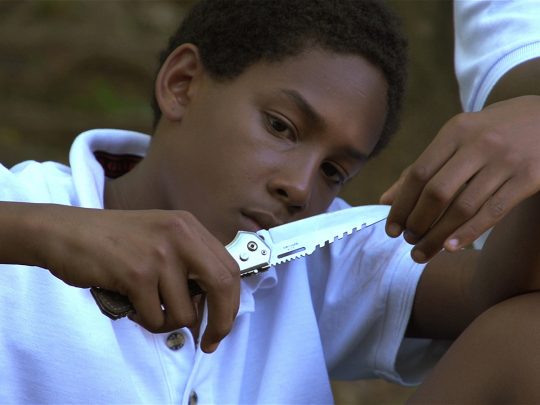