For the second year in a row the trinidad+tobago film festival (ttff) is pleased to feature Carnival historian and researcher Ray Funk presenting rare historic film clips on calypso, pan and Carnival, at two events.

These free presentations, part of the film festival’s annual Carnival Film Series (CFS), take place at San Fernando Hill and the NALIS Amphitheatre at the National Library in Port of Spain, on Friday 21 and Sunday 23 February, respectively. Both events begin at 7pm.

Ray Funk is a retired Alaskan judge and has been coming to Trinidad and Tobago Carnival for almost 20 years. He writes regularly for the local newspapers, and is passionate in researching a range of traditional Carnival arts. His collection of early film clips is an important part of that research, and he has been doing free educational events showcasing these clips for years, as a way of giving back this heritage.

“I had a great time last year and was thrilled to be able to show cuts that it took me years to find,” he said. “But the highlight of the evening was to have Bill Trotman show up—on his birthday, no less—and see an Italian film clip of a comedy limbo dance that he had performed back in 1961.

“He had told me about it a decade ago and I have been searching ever since to find it. It was special to present it on the big screen with Bill present and give him a copy of the footage.”

Another clip was of the Mighty Sparrow’s first feature-film performance from the same Italian film.

“He couldn’t be there the night of the screening but I was able on Carnival Sunday to see him and show him and his wife Margaret and give them a copy.”

With the success of last year’s presentation, the film festival is pleased this year to have presentations from Funk both in Port of Spain and San Fernando.

When asked about what he is bringing this year to show, Ray is hesitant to reveal too much. “I am still determining which pieces to present, but I guarantee there will be many things that almost no one has seen before,” he said.

“Here are a couple things. Steve and Amanda Zeitlin—the parents of filmmaker Benh Zeitlin, who attended the film festival last year and presented his film Beasts of the Southern Wild—came to Trinidad and shot a short film on extempo several years ago. That will get its T&T premiere.

“For an Association of British Calypsonians tribute to Lord Kitchener, I commissioned a music video on one of his first recordings, on a boxing match. That will also get its local premiere.”

Funk has been working for several years on a project on Harry Belafonte and the American “calypso craze” of the 1950s, which will result in a major coffee table book with a set of six CDs and a DVD. It will be out hopefully towards the end of 2014.

“I have a couple of calypso craze film and TV performances that I want to show in my presentations, including popular American performers doing material by Roaring Lion.”

For Funk, bringing these performances to a local audience is all about returning T&T’s culture to its home.

“My ongoing search to find these clips, present them in Trinidad and Tobago and give them back to the performers has been very rewarding. At all times I am in search of more missing bits of the country’s rich cultural heritage.” 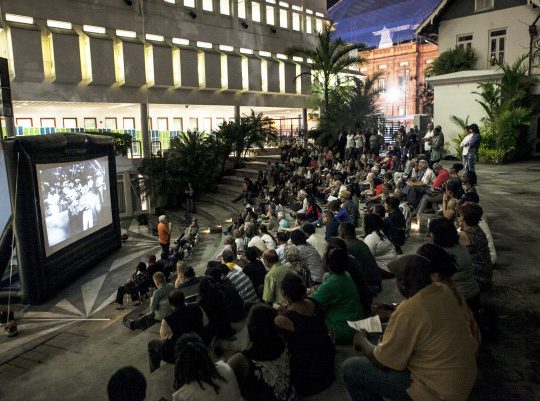