For the third year in a row, the trinidad and tobago film festival (ttff) will feature a presentation of never-before-seen footage of vintage calypso, pan and mas, by Alaska-based retired judge and Carnival researcher, Ray Funk. This event—the final installment in the ttff’s Carnival Film Series (CFS)—will will take place on Sunday 25 January at the NALIS amphitheatre in Port of Spain from 6:30pm. Admission is free.

The presentation, entitled Ray Funk Presents: Calypso Craze, will also see the T&T launch of Calypso Craze: 1956-57 and Beyond. A project ten years in the making, Calypso Craze is a box set containing a 176-page hardcover book, a DVD and six CDs, compiled by Ray Funk and Michael Eldridge for Bear Family Records in Germany.

The set provides a comprehensive survey of the “calypso craze” that swept America in 1957, in part fuelled by the the million-selling album Calypso by Harry Belafonte. The intensity of the craze caused the American entertainment industry to forecast that calypso would kill rock and roll.

“This project grew out of a travelling and online exhibition that I co-curated over a decade ago on the globalisation of calypso music with Steve Stuempfle, then curator of the Historical Museum of Southern Florida, and now executive director of the Society for Ethnomusicology,“ Funk recalls.

“I worked on this for several years and more recently brought in Michael Eldridge, who teaches at Humboldt State University in California and who has done extensive work on this period of calypso history.”

Since being released internationally, Calypso Craze has drawn glowing reviews. Black Grooves, the journal of the African-American music archives at Indiana University, called it “a true labour of love”, while Record Collector magazine deemed it “definitive” and “absorbing”. Uncut magazine declared it “an absolute delight”.

For the presentation at NALIS, Funk will be playing clips from the box-set’s DVD, as well as from two of the three calypso-themed films released in 1957, Bop Girl Goes Calypso and Calypso Heat Wave, the latter starring Maya Angelou. There will also be television footage from 1957, including Boris Karloff (of Frankenstein fame) singing “Mama Look a Booboo”, and an extempo calypso scene from a 1952 film, involving James Mason.

Last October, Funk launched a book of George Tang’s photographs on the Carnival bands of the late Stephen Lee Heung, We Kind ah People. At NALIS, Funk will show some previously unseen film footage that Tang shot of those bands. Additional footage will include home movies of Carnival from the 1960s, as well as the Mighty Sparrow’s first film appearance, from a 1956 Caribbean travelogue commissioned by KLM airlines.

“My goal each year is to offer an enjoyable look into the film history of Carnival,” said Funk. “This year I will be focused primarily but not exclusively on the calypso craze and I guarantee you will see footage that you have never seen before.”

The public is advised that no refreshments will be on sale, so please feel free to bring your own. 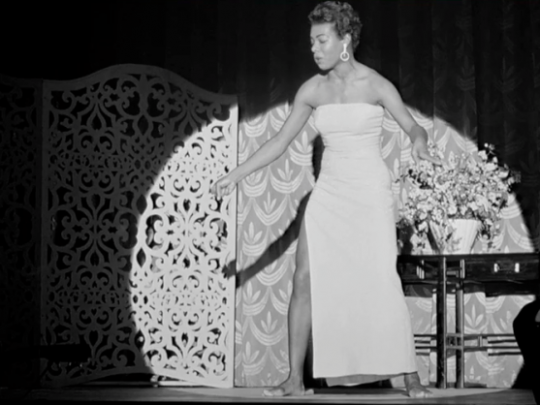