Roy T. Anderson is writer, director and producer of the award-winning film Akwantu: The Journey (2012), on the history of the Jamaican Maroons. In his day job, he leaps from tall buildings; Anderson is a veteran movie and television stuntman/stunt coordinator and second unit director. He has performed stunts for Hollywood stars like Will Smith, Denzel Washington, Jamie Foxx, and Morgan Freeman among others.

The film is told through the use of staged historical flashbacks, as well as present day interviews with Jamaican Maroons and also people like Rita Marley and former Prime Minister of Jamaica, Portia Simpson-Miller. The emotional journey of the story is mirrored by the physical journey of a group of people to Nanny Town, the location the warrior was said to have occupied.

“With that trek to Nanny Town I again wanted to walk in the steps on my ancestors,” Anderson said. “It was quite a journey. I have to give my producer credit because while I was in the cushy helicopter filming, Allison was on the ground leading men on the 13-hour trek to Nanny Town. The Maroons are window dressing for most anthropologists; an afterthought. So this was historic as this was the first expedition by Maroons back to Nanny Town. They were at the centre of this heading to their Holy Grail, to where the spirit of Nanny still inhabits.”

According to Anderson, Nanny is only written about three times in the history books.

“Shame on this historians,” he said. “Like the African proverb, now the lion is telling the story. When people ask me about Queen Nanny, I tell them it’s like Ned Turner but time one hundred and they sit up and listen.”

The film had its world premiere last year at the United Nations in New York. The UN information department has embraced the film as part of their educational outreach and made it available in over 20 African countries as well as Georgia and Australia.

Members of the audience were quite enthused by the film and asked how they could share the piece.
Anderson and his team have put together a discussion guide at nannythemovie.com for educators who want to lead structured discussions about Queen Nanny before or after the film.
“For me women are at the centre of our existence and I give thanks to the every day,” Anderson said. “I think there is a bit of Nanny in all of us.” 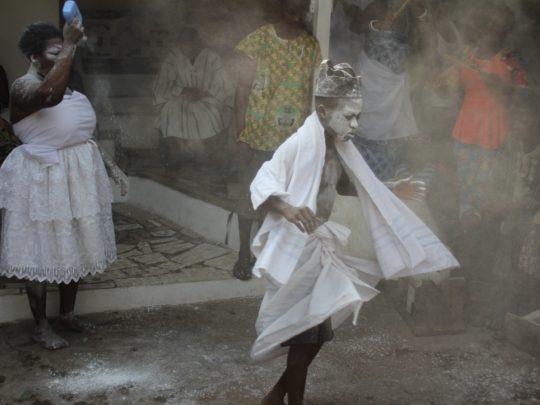