Tomorrow evening the ttff will host an evening with Pascale Obolo, the director of the new documentary Calypso Rose: The Lioness of the Jungle. Born in Cameroon, Ms Obolo moved with her family to Paris when she was six. She studied filmmaking at the Conservatoire Libre du Cinéma Français and the University of Paris, and was one of the first people to document the Parisian hip-hop and graffiti art scenes on film.

Tomorrow’s event takes place at the offices of the trinidad+tobago film festival, 199 Belmont Circular Road, 6-8pm. The public is invited to attend this event, which is free of charge. Call 621-0709 for more info.

How did you get interested in becoming a filmmaker?

When I was young I realised that the language of the cinema is an international language. For me, if you have a message to give to people, images speak to and touch everybody. I was interested in working to fight against racism, against injustice and sexism, and wanted to do that through film—so that’s why I decided to become a filmmaker.

When did you first come to Trinidad and Tobago?

I came to Trinidad ten years ago for Carnival. When I went to the tents I discovered calypso music. When I was young, in Africa, my father used to play calypso music, but I didn’t know that it came from Trinidad. I was very interested in the stories in the songs, and the extempo battles—they reminded me of hip-hop. So I met some calypsonians and started to do some research. That’s when I decided to make my first feature-length film, Calypso at Dirty Jim’s (2005).

Was that when you first met Calypso Rose?

Yes. She was the only woman in Calypso at Dirty Jim’s. I was very interested in her story. In the beginning she was not the main character, but when I started to edit the movie, Rose started to play more of a role. When I finished editing the movie and started to show it, everyone wanted to know who this lady was. That’s when I decided I wanted to work with her. Also, I saw parallels between her story, as one of the only women in calypso at the time she started out, and my own story as a black woman in the French film industry.

When did you start working on Calypso Rose: The Lioness of the Jungle?

The film took four years to make. We started shooting in Paris, and after that Tobago, Trinidad, New York and Benin in Africa. The structure of the movie shows each facet of Rose in each country. In Paris we see Rose the artist; in Tobago, we see where she was born; in Trinidad, we see where her career started and where she became the calypso queen; in America, we show how she became an international star; in Africa, it’s back to her roots.

Was that Rose’s first trip to Africa?

No. She had been to Liberia before, because she is an ambassador-at-large, working in the fight against illiteracy. Her father and mother couldn’t read, so for her it’s a kind of a mission. The government of Liberia asked Rose to represent this cause. She raised funds to build a school there, which is named after her. We were supposed to shoot in Liberia, but there was the war going on, so I decided to bring her to Benin, which is where many slaves left to come to the Caribbean.

What was it like showing the film in Tobago?

It was very important for me to show this movie in Tobago first. It’s the island where everything started for Rose. Also, when we were shooting in Tobago it was very interesting, because everybody knows her. It’s like a big family, Tobago. Everywhere we went people were going, “Auntie Rose, Auntie Rose is here!” So everyone was excited to see the movie. So that’s why I asked the producer if we could start by screening the film there, and to get their reaction.

What would you say to people who are coming to the Trinidad premiere of the film? What can they expect?

The story of Rose. You will see what a great person she is. We see Rose in Europe, in Africa, in America, and everywhere she goes, she promotes her culture. She is a true ambassador for Trinidad and Tobago, and has done so successfully. I think it’s important that people know the story of Rose, and what she has been doing for the country internationally. I was very proud to work with her, and I want other people to be proud of her as well and the work she has done for Trinidad and Tobago. 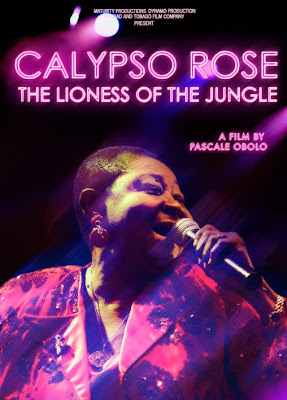