Ninth Floor: A beautiful film about an ugly subject

This quote is taken from an interview with Rodney John on CBC Montreal’s Daybreak. The host, Mike Finnerty interviewed John, now in his 70’s, about the content of Ninth Floor. In 1969 John was one of the six Caribbean students who accused their biology professor Perry Anderson of racist treatment at Sir George Williams University (now Concordia’s downtown campus in Montreal). Amongst other significant points, Anderson’s course gave Black students noticeably lower grades for lab work that was identical to that of their fellow white students.

The other students who lodged the compliant were: Terrance Ballantyne, Allan Brown, Kennedy Fredrick, Wendell Goodin and Douglas Mossop.

Described in Canadian literature as a “watershed moment in Canadian race relations” and “the most dramatic and violent racial conflict in modern Canadian history”, Ninth Floor reopens the discourse utilizing never-before-seen footage of the students’ protest and occupation of the ninth floor computer room as well as interviews with several of the students involved.

Selwyn Jacob, is the film’s award-winning producer. He is Trinidadian and was studying in Alberta at the time of the protests. Jacob was present for the film’s debut in the Caribbean at the trinidad + tobago film festival.

“There are a lot of Trinidadian people in the film and also talent that went into making the film,” he said. “It resonates with the people of Trinidad and I want to back the courage of the people who stood up for a cause they believed and also for the courage to talk about what happened because there is still stigma around those events, so there is courage in 1969 and courage in 2013.”

After two weeks, the Montreal riot police ended the occupation of the computer lab by storming the protest and making arrests.

Ninth Floor was chosen as one of the TIFF (Toronto International Film Festival) Top Ten in 2015.

The film is beautifully crafted. One-on-one interviews are aligned with the backdrop of the breathtaking starkness of a Canadian winter, creating a both a physical and metaphorical space for honest introspection.

Here is an excerpt of the Q & A with Jacob:

Q: There was a book written on the event “Let the Niggers Burn”. Did you consult this book for information?

A: I did look at this book. I was living in Canada when this incident place and I had ordered a copy and at some tie in the 80’s I was coming down to Trinidad and I pulled out the book to do some reading and somebody tapped me on my shoulder and said hey were surprised to see a book by that name and also that a book like that was in print.

There is a lot of research on this event, however my focus was not on the empirical data. That makes for good reading but not the most dynamic filmmaking. I wanted to deal with the intergenerational impact this story had on the lives of the people. So I essence I was going with the flow of the emotional relevance.

This is a never ending story; you have a story like that of Nantali Indongo where the relationship with her father is such a sad story and she talks about carrying the burden of her parents on her shoulder and she wasn’t even born when the event took place.

Q: Secondary schools need to be exposed to this material. I remember when I was in school, we didn’t learn about those things. After the middle passage and slavery there is sort of a void about ourselves.

A: I live in Canada and I work for the National Film Board and their job is to interpret Canada to Canadians so I’m treading that fine line of trying to tell a story that originates in Canada but resonates in the Caribbean.

Threre are Trinidadian people from the film, people who are here today – Terrance Ballantyne, Hugo Ford and Lynne Murray Hugo, Lyn Marie. These people have been the Trinidadian ambassadors for the film.

Q: The debt isn’t even acknowledged. It’s all lost and the black people who have benefitted most are the ones who don’t want to acknowledge it. They act as though it’s an embarrassment. The organization has made them desperate to be as white as they can. There is a deliberate agenda by those in power, the Black and Indian people who don’t want to show it. We are ashamed of our story and we should be proud of this.

A: The Canadian society doesn’t talk about this story, they have buried it. I really wanted to make a beautiful film about an ugly subject. Back in the 70’s nobody wanted to tackle the subject. About 20 years ago they decided to start hiring black filmmakers and I was one of the fist black filmmakers on the National Film Board of Canada. I got to the point where I could select the stories I wanted to tell. Had those circumstances not manifested, this story would still be buried somewhere.

I’ll go a Canadian audience and they will say, “How come I don’t know about this story?” I’ll go to a black audience and I’ll get the same question. Both sides of the fence wanted to keep this story buried.

A that time when I was a student in Edmonton, all I saw was the headlines “Students Destroy the Computer Centre” and you had the impression that it was students who shouldn’t be university. A lot of those stories were revealed when I was doing the research and looking at the stock footage.

You see a story about the Montreal police and they were congratulated for their restraint and then you hear stories from Hugo [saying] that he was beaten by the police. We hear about people who subsequently died from the brutality they might have received and these stores never made it to the newspaper.

The film only has about 10-15% of the information you should be aware of. The Prime Minster of Canada was writing to the Prime Minister of Trinidad and asked that [the government] talk to their citizens and ask them not to withdraw their money from the Canadian banks. These were some of the implications and all pat of the story but you don’t hear about it. 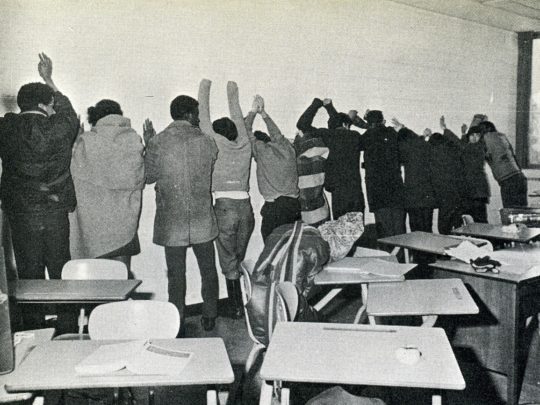