Fans of calypso and pan are in for a special treat on Friday 25 January from 7pm at the amphitheatre of the National Library, as part of the third annual Carnival Film Series, hosted by the trinidad+Tobago film festival (ttff).

Sponsored by the Trinidad and Tobago Film Company, the series features a programme of Carnival-themed documentary and dramatic films. Films shown include feature-length and short works, and comprise both recent and classic films.

This year’s programme includes a presentation by renowned Carnival researcher Ray Funk. A retired Alaskan judge, Funk has been coming to Trinidad and Tobago Carnival for over 15 years. His presentation will show the latest treasures he has acquired in his constant quest to find rare Carnival film and television footage.

“I have found several items recently that I think will excite audiences, whether they love calypso, pan or mas,” Ray noted from his home just below the Arctic Circle. “Almost everything I will show will be over thirty years old and represents rare finds that have come from a wide variety of sources.”

For the pan enthusiasts there will be footage from the greatest steelbands in T&T history, including Dixieland in England as well as Les Flambeaux, Cavaliers, Pan Am North Stars and Desperadoes. There even will be cartoons featuring pan, including a group led by Patrick Arnold when he lived in California.

The calypso clips will include a German documentary featuring Mighty Chalkdust in the 1980s, as well as Lord Cristo at the Rose Bowl parade in the US. Also included is Sparrow’s performance in his first feature film, an Italian movie that also stars Bill Trotman as a limbo dancer.

The various mas bands in other films are harder to identify. “In filming Carnival on the streets filmmakers just shot what came by, rarely concerned whether it was George Bailey, Harold Saldenah or Stephen Lee Heung,” said Funk. “But to serious scholars or Carnival enthusiasts it is important as to exactly what bands are depicted.” Ray hopes the audience will help in the quest to identify what bands are being shown.

Ray’s passion is not only to to bring back these films that were shot in T&T and most of which have never been show here, but also to give copies of this footage to institutions like the film festival. Dr Bruce Paddington, Founder and Festival Director, believes that Ray’s research is an essential part of the educational work being carried out by the ttff. “We need to reclaim our film heritage and the Festival is dedicated to programmes like this that get the film history of T&T out to the people.”

The Carnival Film Series runs from 23 January to 05 February at venues across T&T. Admission is free to all events.

Image: Screenshot from a Carnival film that will form part of Ray Funk’s presentation 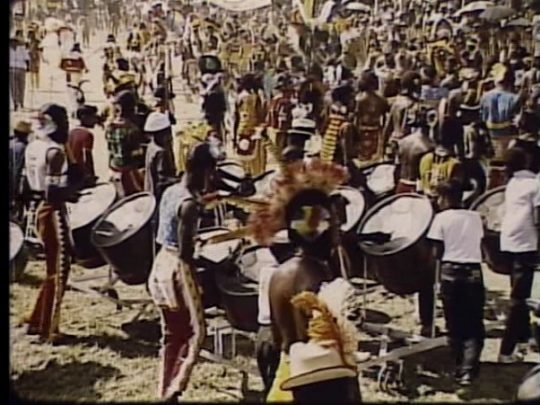