We’re delighted to announce our programming team for the 17th edition of the trinidad+tobago film festival, ttff/22. Once again, we made a public call for applications to become a film festival programmer in the hope of continuing to build the transparency of the festival’s operations, while considering the role of festival programmers in a more strategic way. This year, our team is composed of three Caribbean and two international programmers: Bruce Paddington (ttff founder), Danielle Dieffenthaller, BC Pires, Ivonne Cotorruelo and Jim Kolmar. By extending our programming team to people outside of the Caribbean, we have significantly widened the net both in terms of the films we can curate, and in terms of bringing greater international visibility to our Caribbean films and to ttff.

Ivonne Cotorruelo
Ivonne Cotorruelo is a Cuban Film Curator and Producer based in New York, who has been empowering storytellers for over a decade. She is a Features Programmer at Cleveland International Film Festival CIFF, Outfest, Atlanta Film Festival ATLFF, Trinidad and Tobago Film Festival TTFF and a Shorts Programmer for Aspen ShortFest. She has served as Juror for the Miami Film Festival, New Filmmakers LA, and Havana Film Festival NY.  A Berlinale Talent Campus alumnus, she is always seeking out stories for underrepresented voices. Working on a plan of strategic diversity, equity and inclusion.

Danielle Dieffenthaller
Danielle Dieffenthaller has over 20 years of experience in the television and film industry. She is committed to telling the Caribbean story through quality dramatic and documentary film and television productions. Dieffenthaller is the owner/producer/director of Dieffenthaller Style Films Ltd, which produced the popular programmes “Iere Vibe” and “The Reef”.  She was the main force behind the television production company Earth TV Ltd, and producer/director and co-writer of the acclaimed “Ecowatch” series and the long-running “Westwood Park” (100 episodes). Dieffenthaller’s resumé includes work with TTT, UK-production company Bandung Productions and the groundbreaking production house Banyan Productions, where she and one other crew member were the only local crew to capture the events of the 1990 attempted coup. Among her credits are dramatic, educational, environmental, political and business projects for local, regional and international audiences. She is a co-founder of FILMCO and the 2019 Arts and Letters Laureate of the Anthony N. Sabga Caribbean Awards for Excellence.

Jim Kolmar
Jim Kolmar is an independent programmer who curated films for South by Southwest Film Festival (SXSW) from 2009-2020, where he continues to consult on international and feature films. He is also currently programming for trinidad+tobago film festival, and was a founding committee member at Festival Internacional de Cine Tulum (FICTU). Jim was also a guest curator for Portland International Film
Festival 2021. Jim is a contributing writer for Ambulante Film Festival in Mexico, and has served on juries, panels and committees for organizations including Austin Film Society, BAFICI, Berlinale, Bogotá Audiovisual Market (BAM), CONNeXT, CPH:DOX, IDFA, IFFPanama, IN-EDIT Barcelona, San Sebastián, and Ventana Sur.

Dr Bruce Paddington
Bruce Paddington (PhD) is a filmmaker, lecturer, academic and film festival curator. He was a senior lecturer in film at the University of the West Indies, Trinidad and the co-founder of the Bachelor of Arts Film Programme. He is the founder of Banyan Productions, the New World Film Centre and the trinidad+tobago film festival and was the festival director from 2006–19. He is a consultant and programmer for ttff/20.

BC Pires
BC Pires was called to the bar of Trinidad and Tobago in 1984 and enrolled as a solicitor of the Supreme Court of England and Wales in 1989 but, since January 1988, has done nothing but write for a living. His satirical column, “Thank God It’s Friday”, published more or less every Friday of the last 32 years, began at the Express and, after a few years at the Guardian, has appeared in Newsday since 2017. He has tried to write sensibly about film from an informed lay perspective since 1988. He sat on the first jury of the trinidad+tobago film festival and wrote the Judges’ Report. He has also written about West Indies cricket for publications all over the world, notably, the UK Guardian and Observer newspapers. He has lived in Port of Spain, London, Georgetown and, since 2008, Barbados. He is married to Carla Castagne. Their adult children live in London, where they first went to school, but the remaining family of six dogs, a parrot and a frequently outraged but always loving cat remain firmly settled in the Bajan countryside. 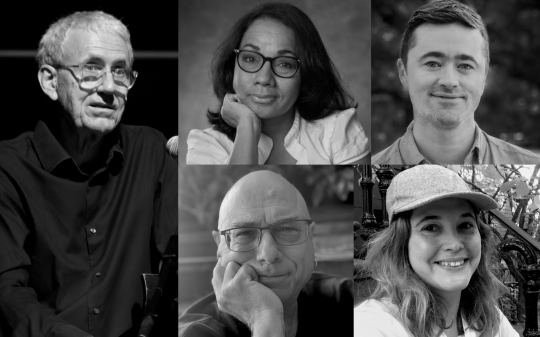