This year, the ttff will award ten juried prizes. Films in juried competitions are rigorously discussed and dissected before being selected by the ttff/20 programming team, and must be unanimously agreed by the three programmers. The shortlist of films in competition is sent on to the various juries, who then watch and deliberate on all the films before coming to a final agreement. The best Trinidad & Tobago film will be decided based on the aggregated results of the combined juries.

Ian Harnarine
Ian Harnarine earned his MFA from NYU’s Graduate Film School. His film “Doubles With Slight Pepper” won a Genie Award for best live-action short drama from the Academy of Canadian Cinema and Television, along with the 2011 Best Canadian Short Film Award at the Toronto International Film Festival (TIFF). It was screened out of competition at the Cannes Film Festival. His work for “Sesame Street” was nominated for an Emmy. Harnarine was one of Filmmaker Magazine’s “25 New Faces of Independent Film” and has been profiled in the New York Times.

Jaie Laplante
Jaie Laplante has led Miami Dade College’s Miami Film Festival as executive director and director of programming for the past decade, overseeing the Festival’s international growth and influence. Additionally, he is the director of MDC’s Tower Theater Miami, the highest-grossing year-round art cinema in South Florida. In 2018, Laplante received the Knight’s Cross of the Order of Isabel la Católica from Felipe VI, King of Spain, for his career work in the exploration of contemporary Spanish and Spanish-language cinema in the state of Florida.

Robert Maylor
Rob Maylor is the CEO and founder of Mental Telepathy Pictures. The company’s first production “Sprinter,” directed by Storm Saulter, won three awards at the 2018 American Black Film Festival (Best Feature, Audience Award and Best Director) as well as awards from around the globe; Will Smith and Jada Pinkett Smith were executive producers. Rob began his career working with the late powerhouse attorney Johnnie Cochran and went on to hold Hollywood industry positions at United Talent Agency, Mark Burnett’s One Three Media and Mark Cuban’s Magnolia Pictures. He received his formal training at Princeton, William & Mary Law School, and the University of Southern California’s Peter Stark Producing Program, where he received a MA in Fine Arts.

Leslie Fields-Cruz
Leslie Fields-Cruz is the executive director of Black Public Media, and the executive producer of the award-winning series “AfroPoP: The Ultimate Cultural Exchange”. Leslie serves on the board of directors for New York Women in Film & Television (NYWIFT) and New Era Creative Space, a local community arts center in Peekskill, NY.

Shola Lynch
Shola Lynch is a Peabody and Emmy award-winning filmmaker, and a 2016 member of the Academy of Motion Picture Arts and Sciences. She makes films about audacious women – and in particular black women. She is best known for her documentaries, “Chisholm ’72: Unbought & Unbossed” (2004) and “Free Angela & All Political Prisoners” (2012). She is currently working on her first scripted film and the lead character is, of course, a woman. Lynch is also the curator of the Moving Image & Recorded Sound Division archive at the New York Public Library’s Schomburg Center for Research in Black Culture.

Chris Metzler
Since graduating from USC with a degree in business and cinema, Chris Metzler’s film career has taken him from the depths of agency work, to coordinating post-production for awful American movies seen late at night in Belgium. His filmmaking work has resulted in him criss-crossing the country with the aid of caffeinated beverages and creating award-winning documentaries such as “Plagues & Pleasures on the Salton Sea”, “Everyday Sunshine: The Story of Fishbone” and, most recently, “Rodents of Unusual Size”. Metzler also serves as the associate director of programming for the all documentary film festival, SF DocFest, in San Francisco, California.

David Gumbs
David Gumbs is an award-winning interdisciplinary artist from Saint Martin, based in Martinique. Recent works include the Currents New Media digital festival in Santa Fe, and the touring exhibition “Relational Undercurrents”, a major survey of Latin American and Caribbean Art, in the United States.

O’Neil Lawrence
Chief curator at the National Gallery of Jamaica, Lawrence has curated over 35 exhibitions including the critically-acclaimed “Seven Women Artists” (2015), “Masculinities” (2015), “I Shall Return Again” (2018) and “Beyond Fashion” (2018). His research interests include race, gender and sexuality in Caribbean and African diaspora art and visual culture; memory, identity and hidden archives; photography as a medium and a social vehicle; Caribbean and general art history and museums and other public cultural institutions. He has contributed essays to publications on Caribbean art and sexuality, most recently Beyond Homophobia (UWI Press 2020). He is currently on the Advisory Council of the Caribbean Art Initiative.

Marsha Pearce
Marsha Pearce is a scholar, writer, educator, and curator based in the Caribbean. She holds a BA in Visual Arts and a PhD in Cultural Studies. Pearce is a lecturer and Visual Arts Unit coordinator at the Department of Creative and Festival Arts, University of the West Indies, St. Augustine Campus.

Analisa Chapman
Analisa Chapman is one of the founding directors of the film production company, Have A Bawl Productions. She has had diverse experience as a producer, traversing film, radio and theatre; and is the president of the Jamaica Film and Television Association (JAFTA). By day she is an intellectual property and entertainment attorney.

Fanny Huc
Fanny Huc is the programming manager at the International Film Festival of Panama. She is also part of the Panalandia Film Festival programming team and collaborated in the first Panama Animation Film Festival. Huc has participated in multiple independent films as well as productions for mainstream media including the BBC, VH1, MTV, Netflix and others.

Eloise Van Wickeren
Eloise Van Wickeren was born and raised in Curaçao. After receiving her MA from the University of Amsterdam, she moved back to her island to apply her skills there. She has had extensive experience in filmmaking in Curaçao, writing and directing several documentaries and short films, but also doing location management for both feature films shot on the Island – “Tula: The Revolt” and “Double Play”. 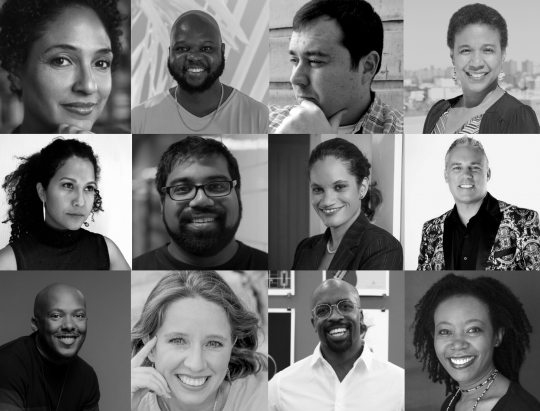