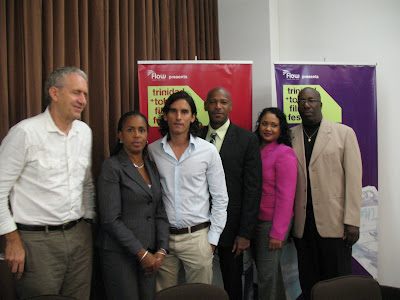 Yesterday saw the official launch of the trinidad+tobago film festival 2010 (September 22 to October 5), with a press conference for members of the media and other invited guests at the Carlton Savannah, the new official hotel of the ttff.

The press conference kicked off with the screening of three of the short films made from the winning ideas of the Festival’s youth film concept initiative, sponsored by RBC/RBTT. Bruce Paddington, the ttff Founder and Director then spoke, reminding everyone that, in a country where over 90% of the content on television and in the cinemas comes from the United States, the trinidad+tobago film festival continues to be of relevance.

Next to speak was Cassian Gyan, Marketing Manager of Flow, the Festival’s presenting sponsor. Ms Gyan noted Flow’s commitment to the Festival, to which end they have extended their sponsorship for a further three years. She was followed by Carla Foderingham, CEO of the Trinidad and Tobago Film Company, one of the Festival’s supporting sponsors, who spoke of the efforts of the TTFC in promoting the film industry in the country.

Then came Darryl White, Head of Invesntment Banking of RBC/RBTT, and John Arnold, Event Coordinator, Division of Tourism & Transportation of the Tobago House of Assembly, the Festival’s two newest supporting sponsors. Both men spoke of the reasons why their respective organisations have decided to come on board with the Festival. Mr White noted the bank’s history of sponsorship of the arts, as well as RBC/RBTT’s parent company, RBC’s sponsorship of the Toronto International Film Festival. Mr Arnold spoke of the THA’s enthusiasm over the planned community film screenings to be held across Tobago during the Festival.

The final speaker was Ryan Khan, a young filmmaker who was one of the directors (along with Michael Mooleedhar) of the short films coming out of the youth film concept initiative. Ryan spoke of his experiences as an up-and-coming filmmaker in T&T, and of his hopes for the local film industry. He hoped, he said, that the day would come when, if a foreigner asked him what life was like in this country, he could answer: “It’s like that film…”

I hope that day comes soon, too.