get to know the inimitable Ray Funk!

Storyteller, historian, retired court judge, Ray Funk, stumbled across Trinidad and Tobago and fell in love with Carnival, steelpan and calypso, and in so doing he became a national treasure whose extensive research has led to the unearthing of rare historical finds of forgotten Carnival history.

For our next ttff talk, we’ll be sitting down for an intimate and wide-ranging conversation on falling in love with carnival, steelpan and calypso with aficionado Ray Funk.

Ray Funk is a retired Alaskan state court trial judge, a Fulbright scholar, an honorary fellow of the University of Trinidad and Tobago and has been coming to Trinidad Carnival for over two decades. He has written dozens of articles on calypso, steelpan and mas, primarily for the Trinidad Guardian and Caribbean Beat; co-written books, curated exhibitions, and lectured in Trinidad, across the US, Canada and England at schools, universities, and libraries on aspects of Trinidad music, carnival, and culture. Funk co-curated a traveling and online exhibition at the Historical Museum of Southern Florida, “Calypso: A World Music”, which went on to tour colleges, libraries, and museums in the US and Trinidad. Michael Eldridge and Funk co-wrote and produced “Calypso Craze”, a boxed set, with a coffee table book, six CDs and a DVD in 2014. He co-wrote two books, Invaders Steel Orchestra and Steelpan in Education: Northern Illinois Steel Orchestra. Funk has done several presentations for the trinidad+tobago film festival over the last decade on historic Carnival footage.

ttff talks is geared towards inspiring and motivating film and television practitioners in Trinidad and Tobago and the Caribbean, by creating a forum for in-depth and wide-ranging one-on-one conversations about the art and creativity, business, joys and challenges of working in the film and creative industries. 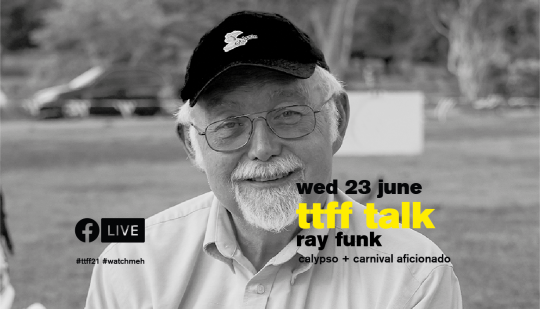