Free ttff/12 films coming to a community near you

Over the two week film festival, running from September 19 to October 1, the ttff will continue to treat a number of communities to a selection of thought-provoking, inspirational and eye-opening films.

On Saturday September 22 at 3pm music and film fans can look forward to the groundbreaking classic film Reggae by Horace Ove and Breaking Barriers, a touching tribute to Mungal Patasar by Ricki-Nicole Manmohan. There will also be a musical interlude entitled “The Old Yard”, a unique and engrossing concert piece written by Adam Walter specifically for the ten-piece ensemble of the faculty musicians at the Academy for the Performing Arts, with poetry by Muhammad Muwakil and photography by Maria Nunes. Horace Ove will be present for a question and answer session after Reggae.

On Sunday September 23, at 7pm, Omardeen’s School of Accounting in Chaguanas will host a special ttff/12 screening of three shorts from T&T: The award-winning Doubles with Slight Pepper by Canada-based T&T director, Ian Harnarine, along with Dal Puri Diaspora, Richard Fung’s eye-opening and richly enjoyable tribute to roti and its origins, and Juliette McCawley‘s One Good Deed, a sweet short film about a boy’s encounter with douens.

Trevor’s Edge in St. Augustine continues to be an eclectic venue and a memorable lime, and at 7pm on Republic Day (Sept 24) will host the portmanteau feature Ring Di Alarm from the Caribbean New Cinema collective of filmmakers. A number of the directors will be present to introduce the film and answer questions. Botched Up, by recent UWI film graduate Dominic Koo will also be shown.

The free community screenings move on to Mayaro on Tuesday September 24 at 7pm. Held in association with bpTT, this screening will comprise another fascinating selection of seven T&T shorts specially packaged for all ages. Films include No Soca, No Life, Kevin Adams’ story about a young woman’s challenges breaking into the soca world, and starring Penelope Spencer; and Pothound, a dog’s view of life by Christopher Guinness.

The historical drama Toussaint L’Ouverture will be shown in two parts at the Alliance Francaise on Wednesday 26 and Thursday 27 September from 7pm. This film stars famed Haitian actor Jimmy Jean-Louis, who will attend the screenings and will be available for Q&A sessions on both nights.

The final community screening will take place under to the stars, on the Carlton Savannah Hotel’s rooftop at 7pm on Monday October 1. Two films challenging the premise of the novel Wuthering Heights will be shown. The short documentary A Regular Black by acclaimed British documentarian Adam Low will be paired with the new, daring adaptation of Wuthering Heights by Andrea Arnold.

North Eleven, the ttff’s official screen partner, will provide the technical facilitation for each of these screenings.

Caption: A cross-section of the audience at NALIS during the ttff’s Side by Side screening of Bim earlier this year. 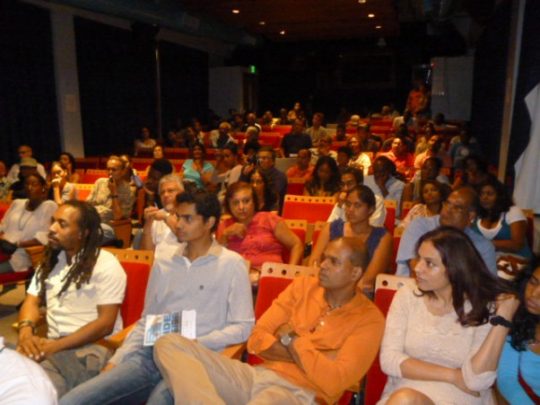