Films in focus: Quedate and Margarita, with a Straw

The short fiction film Quedate, directed by US-Puerto Rican filmmaker Bradley Bixler, and the fiction feature Margarita, with a Straw, directed by Indian filmmaker Shonali Bose, screened at the ttff/15 on Friday 25 September. Our blogger, Aurora Herrera, attended the screenings, where Bixler and Bose were present.

Guillermo works for a human trafficking ring. One night he discovers two refugees, Alondra and her son, Victor, hiding in his truck. He reluctantly shelters them in his apartment, and begins to grow attached to them. Soon the secret makes its way out.

According to the director, Puerto-Rico born Bradley Bixler, the idea for Quedate came from a half-page story he read about a guy who shelters a woman who fled her fiancé on her wedding night.

“[That story] has nothing to do with trafficking but I guess that notion of flight [carried though],” Bixler said when asked about his motivation for this film.

Based in New York, the independent filmmaker is currently pursuing his MFA in Directing and Cinematography at New York University’s Tisch School of the Arts.

“I lived in Guatemala for six months and while I was there I experienced many accounts of migrant workers,” he said. “This is a dramatised story.”

One audience member asked about the editing style.

“As far as the technical part of it, I guess if we’re talking about editing, it’s a matter of keeping a certain pace but I think there are overall certain things in [my] style,” he said. “It’s shot on 16mm film. It’s very hard to come by now, even in New York. There is a very organic feel to it, it’s very visceral and complements the acting style.”

The 23-minute film was shot in an apartment in Washington Heights in Manhattan over five days.

“We worked on giving it a more dilapidated, rustic feeling,” he said. “I think a lot of the feel was just the camera, the reflection and the movement. It’s jerky, it’s handheld, shots are also composed when the actors are moving so I guess it’s a combination.”

Melvina Hazard, ttff director of community development, who introduced the film and hosted the Q&A, said that she felt that the film was very moving.

“When you look at the idea of human trafficking there is something so horrendous and you think about all of these nameless, faceless people and you have put a human face to it in a very sweet and touching and emotive way,” she said.

I too felt that the film dealt really well with the issue of human trafficking, as it humanised both sides of the business. Bixler does a good job of exploring the stories of both the trafficked and the traffickers. One does not usually feel empathy for the traffickers so I really appreciated this change in perspective.

Bixler also spoke about the casting process, explaining that it was not as simple as one would think.

“I had a casting director do the casting,” he said. “There are over 50,000 actors in New York but there aren’t as many Latinos as one might think. The film involves Central Americans. We were looking for certain things like Central American Spanish and certain accent highlights. You want that for accuracy.”

This film is magic.

Margarita, with a Straw is a film about love, loss, learning, growth, pain, resolution and happiness. It is a gorgeous moving snapshot of precious life. It is about Laila, a bright young woman from Delhi with cerebral palsy. She comes from a very loving family. Laila falls in love with Nima, a fellow musician in her class. When this boy rejects her, a heartbroken Laila accepts a place at a university in New York with the support of her mother. There she meets Khanum, a blind Pakistani girl. Slowly their friendship blossoms into a tender romance, and Laila is made to reconsider everything she thought she knew about herself and her world.

I truly feel that if I did not see this film and witness the charm, wit and love of Bose when she spoke at the Q&A, that my life would have been less, that I would have missed out on a luminous experience.

Bose’s real life inspiration behind the film brought me to tears.

“My first cousin has acute cerebral palsy and she is only a year younger than me so I grew up doing everything with her,” she said. “We did everything in the same way until the point we were teenagers and I was able to date and she wasn’t. I was very conscious of that and I actually didn’t date at that time because I felt that she would feel terrible now to be left out. So when I was 40 and she was 39 and we were in London at a pub and I asked her what she wanted for her birthday and she said, “I just want to have sex!” it just threw me. She pointed out that family members and caregivers ignore the sexuality of the disabled the most and don’t enable it.

“Then in the summer of 2010, I was having lunch with my son Ishan, and I told him for the last couple years I finally feel in my own skin, I’ve been doing this work on myself and instead of seeking external affirmation as a filmmaker, finally I feel internal affirmation, empowerment and acceptance. This movement of seeking external love and affirmation to total self-love and acceptance so that you can go on a date with yourself, gave me the working title of the film, I Have Me. I asked him if he knew what I meant and he looked deeply into my eyes and he said “Mama, I totally know what you mean because I feel I have me.” Three weeks after that conversation he died in a horrific accident. The journey of the last five years is really raising a margarita, a toast to life, life with all of its ups and downs and celebrating the darkness and pain as well as the good things.”

I was really surprised to find out that the actress who plays Lila, Kalki Koechlin, was not disabled. She was totally authentic. Bose, who has a very close working relationship with her actors, explained that at first she did try to find a disabled actor to play the part.

“I did first try to find somebody who had cerebral palsy, not to be politically correct but because I felt that no one else would give them a chance,” Bose said. “I did a nationwide hunt in India for actors who were blind and had cerebral palsy. I couldn’t find 19-year-olds who could do that so I turned to professional actors. Of course it was terrifying to find someone to pull if off authentically because if it wasn’t authentic I would not have made the film and the agreement with Kalki was that even if we go through this whole thing and we get to the set and we can’t pull it off, we are going to abandon it because I cannot not have it be authentic.”

In terms of the multilayered storyline, Bose faced many challenges to get the film to the screen.

“As soon as I made the character bisexual, we lost 50 per cent of our funding,” she said. “It’s illegal to be gay so it became a political issue. I said, ‘Are you kidding me? You’re not going to give me money because it’s dealing with a gay issue?’ Now I’m going to find the money because this is so wrong and I have to fight this now.”

Eventually Margarita, with a Straw opened on 250 screens in the country.

“So many young gay people wrote to me and said, ‘We took our families to see the film and then we came out to them.’”

Bose maintains though that the film is not about being gay, disabled, Islamic or inter-caste.

“Why should we always show the mainstream, the Punjabi North character?” she asked. “[The character of] Khanum is Muslim but she is not standing in for Muslims. It’s a not about Muslim identity. It was not a film about disability nor is the film about being gay—why not have a character that is gay but it’s not about the issue? I feel that you shouldn’t get locked into identity politics.”

Melvina Hazard, ttff director of community relations who introduced the film and hosted the Q&A informed the audience that it was a unanimous decision by the ttff programming committee to include this film.

“I was struck by how delicately you handled the story, telling it so tenderly,” she said. “You can see that there is a lot of love that went into this film and lots of love in the interactions of the characters.”

I could talk about the script, camera angles, colour, production and sound design of the film but I won’t. The only thing I have to say is: For the enrichment of your own life, please, watch this incredible film.

Image: a still from Margarita, with a Straw 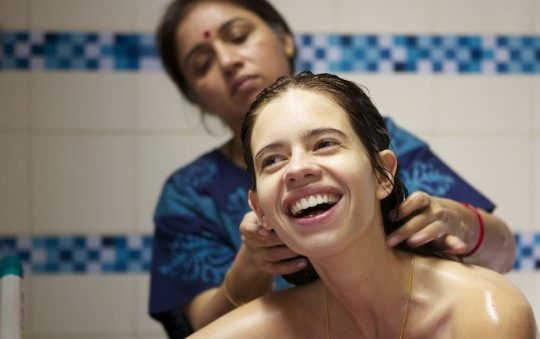