The T&T documentaries Paradise Lost, directed by Christopher Laird and Re-Percussions: An African Odyssey, directed by Kim Johnson, had their respective world premieres at the ttff/15 on Friday. Our blogger, Aurora Herrera, attended both screenings.

Peter Minshall is truly a rarity in the polychromatic scope of existence.

I was mentally competing with myself for this year’s Festival to see how many films I could see without being moved to tears. If you’ve read my blogs over the past two years you would know that I am inevitably affected by the magic of film. Thus far, I have seen seven films. This eighth film, Christopher Laird’s Paradise Lost, which explores the genesis of Peter Minshall’s first masquerade band for the 1976 Trinidad and Tobago carnival, was my undoing.

It was my undoing in such a marvellous and wonderful way!

Peter Minshall has such an overpowering love for art that it moved past the film screen and touched every fibre of my being.

Christopher Laird, who has more than three decades of visual storytelling to his name, having produced over 300 documentaries, dramas and other video productions with the pioneering Banyan Limited, has achieved what he set out to do.

“Ray Funk persuaded George Tang to show his footage [of the band Paradise Lost] at the National Library last year, and it reminded me immediately of the effect it had on me when I saw the band in ’76,” he said at the screening. “It was jaw-dropping. We had never seen anything like it before. We saw the future of Carnival. It meant something about life and death and art.

“I said that we really need a documentary about these things so the newer generations can see what mas is really like in the quarter century that Minshall worked in the genre.”

The footage had the same effect on me. Even now as I write this, I have tears in my eyes and I feel like I have experienced something of true value and I have had a chance to share in a very important historical moment of Trinidad and Tobago. From my generation to yours, from me to you, thank you Mr. Laird.

In the work, Laird films Minshall viewing and reacting to the remastered version of the only known film footage of the band on stage.

“I really thought that we would shoot it, people would talk about the story, they would show the footage and it would be a good document but Minshall’s presentation and story telling is what brought it into another realm,” Laird said. “It becomes a story, it becomes a drama, something very touching.”

Laird effusively commended Tang for his coverage of the band.

“It is very easy to just look at George’s stuff and just say ok, fine,” he said. “George was also working for TTT the time. He would have to film with one camera on each shoulder. We are all lucky that he was able to use a super 8 camera, which was loaded with cartridges so he didn’t have to stop every few minutes to load another reel. I don’t know of any other moving colour footage of the time. TTT was black and white but changed to colour that year. It’s all shot expertly, from one side, carefully and steady, [with] a minimal number of jump cuts. He captured everything in a most masterful way and we cannot underestimate the contribution that George has made.”

Peter Minshall was at the screening and responded to a question from the audience member, about what was so groundbreaking about the band.

“[W]hat’s different about Paradise? I didn’t choose to come back. The thing held me by the foot and pulled me in. I had to make mas as art and you know it, enough people heard it and said ‘Mas as art? I in dat!’”

Re-Percussions: An African Odyssey is the return of the Trinidad and Tobago steelpan to its African roots. Kim Johnson and Jean Michel Gibert, the team behind last year’s opening night film, Pan! Our Music Odyssey, have gone deeper into the history of pan and found connections with our African past and present.

As Nigerian panman Bowie Sonnie Bowei attempts to nurture a steelband movement in Africa, he has to confront the challenge of propagating a creation of the descendents of enslaved people in a complex society, with its own percussive traditions.

I think it is a huge compliment to the people of Trinidad and Tobago that Chief Bowei wants to make pan a part of the culture in his country.

Johnson gave insight into his inspiration for making the film.

“Last year some of the people who criticised [Pan! Our Music Odyssey] didn’t like the fictional component and they wanted some idea of the history of pan,” he said. “When Jean-Michel and I originally came up with the idea of the first film, we called it Pan Global. Part of the idea was the global spread of pan and we thought maybe we would just do that as part two.”

The film actually had a rough start as Johnson’s Trinidadian camera crew had to turn around in London and fly home due to a mandate issued by the Trinidadian government that anyone coming from Nigeria would be quarantined as a security measure against the Ebola outbreak.

“I found the camera crew from hell and it was very, very difficult,” he said. “So you just have images and it’s like pieces of a puzzle but you don’t know what the puzzle is and what to make with those pieces. We planned to use the chief in our story because he was coming to Trinidad anyway and then I went to Lagos and I was there with him. Otherwise, this story is sort of like, you go and see what you get and you get these pieces and see how can I turn this into a story.”

Chief Bowei also finds it difficult to make pan a substantial part of the Nigerian musical culture. He believes that pan is his destiny and is relentless in learning all he can from the Trinidadian panmen and passing on that knowledge to the young people he teaches. Some of these young people start off never having seen a steel drum before and have to acquaint themselves with every aspect of it. He also comes up against challenges with getting new equipment and the tuning of the new pans. However, he perseveres and finds a way to manufacture pans and recruit interested young people.

One of the audience members from Nigeria encouraged Johnson and Gibert to continue their documentation of the growth of pan in his country.

“There is room for follow up,” he said. “We will want to know how far Chief Bowei has reached with pan in a few years.”

I totally agree. This team should not stop investigating how far this country’s national instrument has impacted people around the world.

You can catch another screening of Paradise Lost on the following date:
24 Sept, 11.00am, MovieTowne POS Q&A

You can see Re-percussions: an African Odyssey on the following dates:

Still: An image from Paradise Lost 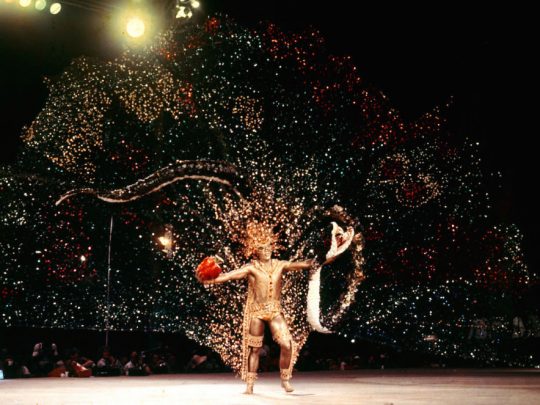