Films in Focus: Dreams in Transit and Trafficked

Two Trinidad and Tobago films, the mid-length documentary Dreams in Transit, directed by Karen Martinez, and Trafficked, a fiction feature directed by Sean Hodgkinson, had their world premieres at the ttff/15 last evening. Our blogger, Aurora Herrera, attended both screenings.

Dreams in Transit revolves around the question of identity particularly for Trinidadian expats. Martinez herself is London-based, and in the film returns to the Caribbean to explore the meaning of home and where it is both migrants and non-migrants might be said to belong.

I was very moved by the film having grown up as a third-culture kid, living my teenage years between Trinidad and Venezuela and then coming into adulthood in North America. I found that I could relate to many of Martinez’s points. For example, the film noted the way expats actually draw closer to their Trini culture when they are in a different place because if they don’t, they might feel invisible.

Martinez quotes Salman Rushdie, “Sometimes we feel we straddle two cultures; at other times, that we fall between two stools,” digging up and examining the conundrum that expats and migrants experience.

The juxtaposed silent narrative of a girl experiencing all of the emotions that the interviewees expressed was a beautiful compliment to the texture of the documentary. The emotive quality was very engaging.

Martinez’s film is very well thought out and exposes the differences in the corners of our bones as people who, even though we were born in one place, have very different understandings and perspectives on who we are. Not only are we still digesting our varied and beautiful familial heritage, but we are also now travelling globally and absorbing other influences, ideas and ways of being into our blood.

The late cultural theorist Stuart Hall is also quoted in the film, saying that our identities are fluid rather than fixed. I quite like that notion. After years of reflection, I decided that it didn’t matter where I was born, travelled to or lived, relating to parts of the ongoing dialogue that Martinez insists we should explore. I am the one who constantly determines who I am. I decided that my landscape lives and blooms within.

You can catch another screening of Dreams in Transit on Fri 25 September at 1.00pm, MovieTowne POS.

The film is tells the story of George, Penny and Nadia, who are best of friends. While on vacation on an idyllic Caribbean island, they find themselves being seduced by a stranger’s wealth and charm. When the stranger’s true motives are revealed, the three friends realise that they are pawns in a deadly game of drug trafficking.

The British High Commissioner was in attendance and stressed the importance of addressing this issue in our country and commended Garth and Natasha St. Clair of the NGO Eye on Dependency for their work in bringing this issue to light.

St. Clair begged the audience not to forget the innocent people forced into trafficking who are currently in jails in across the world. He also described the film as a “crime-fighting tool in the arsenal of Trinidad and Tobago.”

Image: A still from Trafficked 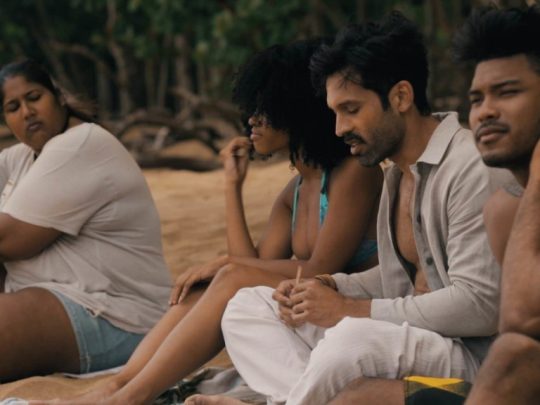