Films in focus: Just a Drop, Down and Out, City on the Hill

A group of short T&T documentaries—Just a Drop, Down and Out and City on the Hill—screened at the ttff/15 yesterday. Our blogger, Aurora Herrera, attended the sold-out screenings.

Both Shea Best and Dominic Koo are graduates of the Film Programme at the University of the West Indies.Best is the director of the short drama The Cast (ttff/14)and Koo directed the short fiction film Botched Up (ttff/12). Stephen Hadeed Jr. is a Trinidad and Tobago actor. His credits include Festival of Lights (ttff/11) and Pendulum (ttff/15).

The six-minute film is about a drop of water that embarks on a journey to save a dying flower during the dry season.

Hadeed Jr. was inspired to make the film after going through the mundane act of washing his hands at a standpipe on the property were piece was filmed.

“The standpipe is at the top of a very big driveway and it curves around and goes all the way down to a drain,” he said. “I just started following the water, just walking down the driveway and I just wanted to see that journey a little more up close.”

The film is a visual treat. As Best said to the audience, Koo is a master behind the camera. I felt as if I was watching a real-time evolving painting as the water canvassed the concrete and dirt, making its way through ruts and crevices simultaneously collecting and discarding contents collected in its flow.

The music is also quite enjoyable and definitely emotive, connecting you to the journey of the water, always downhill, to the flower.

“Basically I wanted Lord of the Rings with water and after some work, I think that’s what we got,” Hadeed Jr. said.

The trio said that the film was shot over four, eight-hour days and also joked about the challenges of working with water, saying that it would not reset when directed to do so.

You can catch another screening of Just a Drop on the following dates:

Down and Out had its world premiere at the ttff/15 last evening. The film takes a look at the struggles that homeless people face in society and how the Centre for Socially Displaced Persons (CSDP) works toward alleviating these problems.

The film was done by three final-year students of the Film Programme at the University of the West Indies: Shanice Martin, Michaela Spencer and David Villafana.

Martin, who has always been curious about the stories of displaced persons, decided to interview the homeless people who went to the CSDP.

The main challenge the team had was security.

“Mr. Belgraves, the man you saw in the film, kept telling us that when we’re going out there we should bring somebody with us because it could get dangerous,” Spencer said. “He used to always come with us. We also just had other normal challenges like trying to get expensive equipment to that part of town.”

When one audience member asked about violence, Villafana explained that there are violence issues with the residents.

“There is 24-hour security at CSDP but if there is [violent] behaviour like that they are escorted out of the building and they go to Tamarind Park which is not to far from CSDP,” he said. “Even when they are there, they are not fully safe because some of them have money, they get robbed when they are sleeping or attacked.”

Another audience member commended the team on their effort saying that homeless people are treated “like trash” and we have “trained ourselves not to see them.”

The documentary featured on-camera interview with residents who were HIV-positive, drug addicts and deportees, who all got a chance to tell parts of their story.

The team was also challenged to go back into the project and re-edit and make the documentary longer. As it was a school project, the co-directors were dealing with many restraints in terms of time.

Villafana commented that it is an unfinished project and that they have a lot more material to work with.

You can see another screening of Down and Out on the following dates:

City on the Hill is a look at the history of the communities erected on the hillside slopes of Laventille. The film examines the evolution of the chequered relationship between the landscape and its inhabitants, as well as selected aspects of Laventille’s architecture.

The film is part of a larger project. It was commissioned by Leveraging Built and Cultural Heritage of East Port of Spain, led by Dr. Asad Mohammed. Patricia Mohammed and Michael Mooleedhar, who previously teamed up for the short Coolie Pink and Green (ttff/09), directed the film.

I do think that the project to map the cultural and architectural heritage of Eastern Port of Spain is brilliant, timely and also a much-needed filler for the gaps of our collective history. Mr. Mohammed’s project is visionary and will give much to the present and future generations of Trinidad and Tobago.

As one audience member said, “I didn’t grow up here but I felt very proud to be Trinidadian watching that. I felt like you gave me a piece of Trinidad that I would not have found in a textbook or online.”

Another audience member, a London-based teacher, said that the film would be a great tool to utilise in schools both here and abroad, as a window into the culture and heritage of East Port-of-Spain.

The narrative is opulent, featuring the words of Nobel Laureate Derek Walcott, novelist Earl Lovelace’s poems specifically written for Laventille, as well as poet Wayne Brown. The cinematography was captivating, showing areas of Laventille that I have never seen on screen. The religious theme was very informative as were the drumming and dancing themes. I think that anything that shows us our country is a great step forward.

There is just one thing that I can’t seem to reconcile about this film though. Ever since seeing the film yesterday afternoon, I’ve been having as issue with its presentation. I’ve spoken about it with colleagues and also just meditated on it in my mind.

The reason that the film was commissioned is substantial and important. However, the film absolutely failed to mention the horrendous crime that takes place in the area.

While I realise that this film is a commissioned project and not an investigative documentary and that the team intentionally left out this part of reality in order to cast a more positive light on the area, I think it would have strengthened the film to at least acknowledge the vulnerability of the area.

After all, when I asked Mooleedhar why some of the camera shots were so shaky, he said that they had to shoot with handheld equipment due to the security risks.

Since this is a documentary film, I would have liked to see the team be true to the experience. I would go so far as to say that it is even a bit unethical to sort of advertise Laventille as such a friendly place when your own team has consciously planned to shoot with equipment that facilitates a speedy evacuation of that same area, should the violence they are wary of, actually unfold.

You can see City on the Hill again on the following dates:

Image: a still from City on the Hill 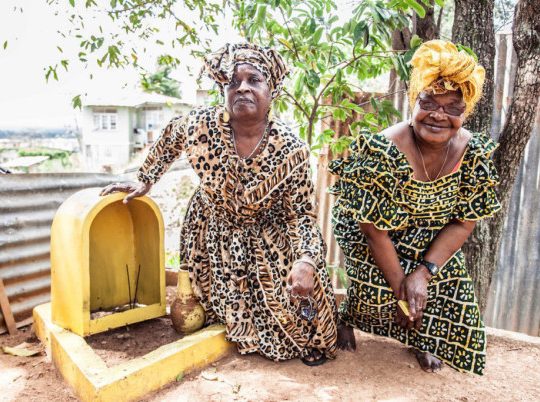