The documentary Vanishing Sail, directed by Alexis Andrews, won the People’s Choice Award for Best Feature Documentary at the ttff/15. Our blogger, Aurora Herrera, attended the screening of the film on Saturday 26 September, where Andrews was present.

“Life is too short for instant coffee and Rice Krispies.” – John Smith

This is my favourite line from Vanishing Sail.

Vanishing Sail is a film about the traditions of boat-building in the Grenadines but by emphasising this part of John Smith’s interview, director Alexis Andrews is pushing the audience to dig deeper, to size up the routines of instant gratification in their own lives and to do the work needed to experience a deeper sagacity of life.

The film focuses on Alwyn Enoe, one of the last boat-builders of Carriacou, who practises the trade passed down the generations from the Scottish settlers who arrived in the 19th century. At one point, these traditions of boat-building were crucial to the survival of the islanders. However, with the younger generation now interested in other pursuits, these skills have all but vanished. Approaching his 70s, Alwyn decides to create a final sailing vessel before the skills introduced by his ancestors are lost forever.

Through mapping the creation of this vessel, Andrews gifts the audience the ability to witness the miracle of creation.

From the cutting of the trees that form the skeleton of the boat to the addition of reinforcing sinews of planking to fortifying joints of screws, nails and caulking to the fleshy materialisation of sandpapered and painted decks, a masterful mast and swift sails, Andrews connects the audience to the three-year journey to birth the Exodus.

“The film itself took three years, [the length of time it took] to build Alwyn’s vessel,” he said. “During that time I sailed up and down the Caribbean looking for stories, for people who had a connection with boat building and I thought it would be maybe ten people that I find with interesting stories and during the course of my travelling up and down, I did 49 interviews. We [had] 180 hours of footage. So then it took another two years to refine the story and a lot of people, when they heard the project was in development, began to get in touch with us and they wanted to submit photographs or pieces of music or old footage which was wonderful because it all helped to tell a wider story.”

The film features several voices that have all been a part of the salt-sea life, working on boats in varying capacities, as well as a cultural scholar and a storyteller from the Carriacou community who give life to the history of boat-building and sailing, recounting their memories with charisma and the emotion of genuine nostalgia.

Andrews was born in Greece and studied photography in London before moving to Antigua in 1985 to work as a commercial photographer in the yachting industry.

Combined with his natural eye for framing, creativity and composition, Andrews’ natural love for boat-building, sailing, as well as his respect for Alwyn, give the film a beautiful buoyancy. Andrews has lived in Antigua since 1895 and has been visiting Carriacou for over a decade, during which time he was able to build a boat with Alwyn, the Genesis.

I suspect that it is because of this true experience of the island, the people and the boats that Andrews’ portrayal of the life there feels authentic and intimate. Moreover, because he is invested in the story, he gets the audience to invest in the story. I felt like I was right there with Alwyn and his sons all the way through. I mean, they made a sail boat, from scratch, with their bare hands. That is completely beautiful and remarkable. I marveled at the latitude of work and felt utterly impatient to see the vessel in the water. On the launch day, as they were rolling the boat down to the shoreline, I realized I was holding my breath and only when it hit the water did I breathe a sigh of relief, happiness, pride and exultation.

One audience member commented on the cinematography saying, “It was beautifully shot and edited. The camber of the edit allowed for moments of stillness but also it had this racing element as well.”

They also inquired as to the size of the crew, kind of equipment and whether it was invasive in the community. Beautifully edited, it must have been very challenging to put that together.

“Basically I’m not a filmmaker,” Andrews responded. “I’ve never done this before but I know how to use a still camera. So the Canon 5D is what I shot the entire film on. It captures the composition very well, the colours are amazing and it’s completely unobtrusive. Often when you point that at someone, they think you’re just taking their portrait, so the dialogue would continue naturally.

“The other person who shot the film, Justin [Sihera], he is from Carriacou himself and the two of us kind of developed this way of moving through the village in a very natural way. It’s a huge honour to have been part of the life there and to tell the story because it was collaborative and Alwyn and his family not only gave of their time and their stories but they were hugely supportive all the way through and they trusted me.

“Alwyn is a man I have huge respect for because he represents a very important thing that we sometimes miss in this fast-paced world and that is if you love to do something and you have a culture behind you and you do it and keep doing it and love it, you build respect. I love that about him.”

There were also Carriacouans in the audience who commented on the film.

“I’d like to congratulate you as a Carriacouan for such a wonderful piece of work, a wonderful film and a great work of art,” one of them said. “You have preserved our history, our culture and our heritage in a form that’s just incredible. I’m very impressed. Well done and thank you very much.”

Another audience member informed Andrews that members of the Compton family, who are featured in the film, were in the audience.

“This film was very special because they got to see some of their family,” they said.

When asked about why traditional boat-building is struggling to survive, Andrews pointed out the changing priorities of the young people and the economy.

“Young people are not willing to put that kind of work in,” he said. “It’s a lot of hard work. It’s much harder to build a traditional vessel than it is to build a speedboat. You can build [a speedboat] in a month and he can do business with it really quickly. The only way that traditional boat-building could really survive in this culture any longer is two ways. One; build boats for people who appreciate it—people who like to race and identify with lost traditions. There are a few of us crazy people out there. Two, the main way it works is tourism, because a lot of people like to experience to real Caribbean. But the real Caribbean is not going around on a chartered catamaran on a rum cruise. That’s fun but it’s not very cultural when you put it next to feeling the soul of a wooden boat under your bare feet and when you go out there, and then you have the rum. Tourism is a lot of these boats taking charters and that’s how they survive.” 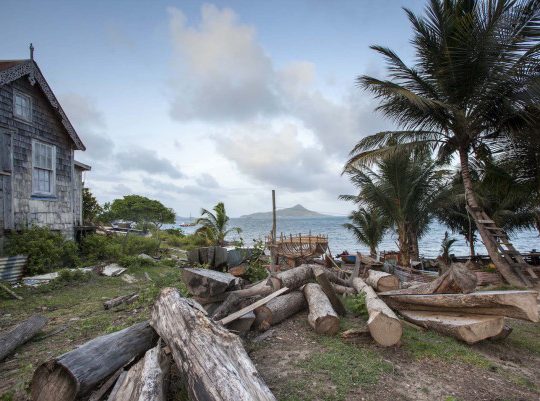