The ttff is pleased to be collaborating with the Art Society of Trinidad and Tobago in screening several films as part of the society’s November group exhibition. This Wednesday 19th September at 7.00pm, two films will be shown: Smallman: The World My Father Made (Mariel Brown/T&T/10′, a ttff/13 world premiere) and Luise Kimme: I Always Wanted to Sculpt Apollo (Eike Schmidt/Germany, T&T/56’/ttff/12). The venue is the Art Society, corner Jamaica Blvd and St Vincent Ave, Federation Park, Port of Spain. The screenings, which begin at 7.00pm, are free and open to the public.

Synopsis for Smallman: The World My Father Made

Kenwyn Rawlins had a passion for making things. In a workshop beneath his house he made push toys, model battleships, miniature furniture and dolls’ houses. Smallman is an exploration of the world that Kenwyn Rawlins made, as told by his son Richard.

Synopsis for I Always Wanted to Sculpt Apollo

The late Germany-born sculptor Luise Kimme lived and worked in Tobago for over three decades. This film, shot in 1994, tells the story of her life and art.

Last Wednesday 12 November Smallman: The World My Father Made and The Radical Innocence of Jackie Hinkson were screened at the Art Society.

Image: A still from Smallman: The World My Father Made 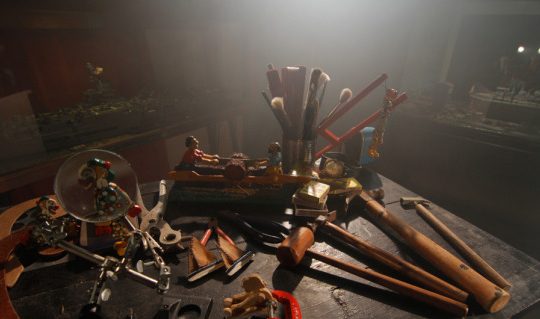