The trinidad+tobago film festival (ttff) is presenting a series of film screenings to commemorate the 52nd anniversary of the country’s independence, sponsored by The National Gas Company of Trinidad and Tobago Limited.

The screenings take place over three days in San Fernando, Port of Spain and Tobago, respectively. All screenings are free and open to the public.

The first screening takes place on Thursday 28 August, in the observatory at the San Fernando Hill Recreational Centre, from 7.00pm. The films to be screened are the documentaries Julia & Joyce (Sonja Dumas/2010/60’), the story of two pioneers of dance in T&T, Julia Edwards and Joyce Kirton; and The Strange Luck of VS Naipaul (Adam Low/2008/78’), a portrait of the Nobel Prize-winning author.

Then on Friday 29 August from 7.00pm, at the audiovisual room at NALIS in Port of Spain, there will be a screening of Fire in Babylon (Stevan Riley/2011/87’), the inspiring story of the all-conquering West Indies cricket team of the late 1970s, 1980s and early 1990s.

Finally, on Sunday 31 August at 3.00pm at MovieTowne, Tobago, two films will be screened: The Audacity of the Creole Imagination (Kim Johnson/2010/13’) and
‘70: Remembering a Revolution (Alex de Verteuil, Elizabeth Cadiz-Topp/2011/120’). The first film looks at milestones in the history of the creation of the steelpan, while ’70 is a thoroughgoing account of the black power uprising of 1970.

Doors for the first two screenings open at 6.00pm. Seating is on a first-come, first-served basis. Technical services will be provided by North Eleven, the ttff’s official screening partner.

Image: A still from Fire in Babylon 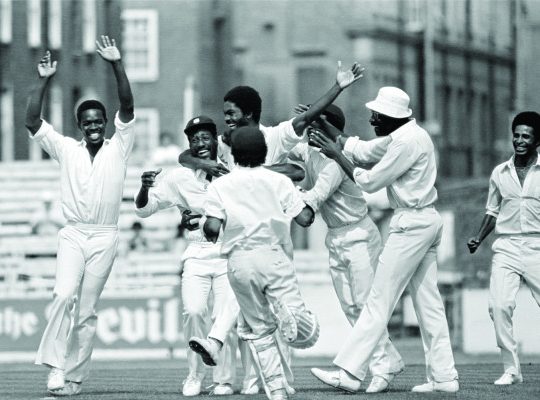