As a boy growing up in Trinidad and Tobago, Richard Fung loved dhalpuri roti. As a filmmaker now living in Toronto, he decided to discover the origins of this justly celebrated dish.

Richard’s journey took him first from Canada to his native land. He then headed to the Bhojpur region of India, where the ancestors of the majority of people of Indian descent in T&T came from. Finally he made his way back to the snowy streets of Toronto, where a sizeable Caribbean community lives.

All the while Richard filmed his epic quest. The end result was the documentary Dal Puri Diaspora, an eye-opening and richly enjoyable 80-minute tribute to a unique culinary invention that has travelled the world.

Dal Puri Diaspora had its world premiere at the trinidad+tobago film festival (ttff) in 2012, and was rapturously received by audiences. Now the Festival presents it again, free of charge, on Saturday 7 June from 7pm at the St James Amphitheatre, as part of the annual We Beat festival.

The screening is sponsored by the Trinidad and Tobago Film Company (TTFC) and presented in association with the St James Community Improvement/We Beat Committee. This is the fourth year that the ttff will present a film during the We Beat celebrations.

According to Melvina Hazard, ttff Director of Community Development, “This screening is a perfect mix of occasion, venue and subject, since We Beat celebrates our culture and St James has a longstanding tradition of street roti sales.”

As if to emphasise this point, one of the most popular roti sellers in St James is featured in Dal Puri Diaspora.

In an interview with Xfinity TV blog Richard recounted some of his discoveries in making the film. “What’s intriguing is that the West Indian roti is something that is intensely regional in India, only eaten at certain times and not commonly sold on the street,” he said.

“In Kolkata dhalpuris are more commonly available than in Bihar,” he continued. “Yet in the southern Caribbean it became the most widely eaten ‘Indian’ food, and in the Caribbean diaspora it has become the most commonly consumed dish. So not only has the dish changed, but its very identity.”

As a result, the documentary tracks dhalpuri’s remarkable passage across space and time, linking colonialism, migration and the globalisation of tastes.

Dal Puri Diaspora also features interviews with leading scholars and food writers, including Brinsley Samaroo and Patricia Mohammed of Trinidad and Tobago, and Pushpesh Pant and Radhika Mongia of India.

Admission to the St James Amphitheatre to see Dal Puri Diaspora is free. There will be refreshments on sale. 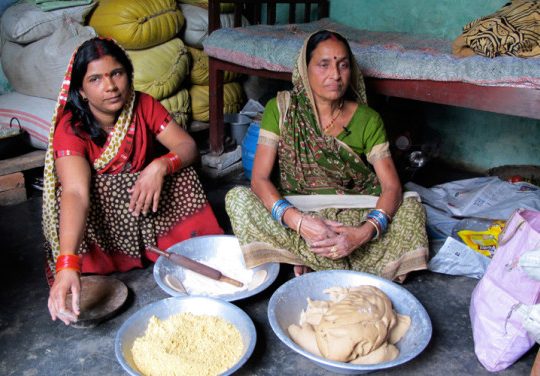