Festival ends year with free screening of Songs of Redemption

As its final event for the year, the trinidad+tobago film festival (ttff) is hosting a free screening of the documentary Songs of Redemption, on Tuesday 10 December, at its offices at 199 Belmont Circular Road in Belmont.

The screening takes place in association with Amnesty International, in observance of Human Rights Day.

Amnesty International is “a global movement of more than 3 million supporters, members and activists in over 150 countries and territories who campaign to end grave abuses of human rights”, and is “independent of any government, political ideology, economic interest or religion.”

Human Rights Day was proclaimed by the United Nations General Assembly in 1950. It seeks to bring attention to the Universal Declaration of Human Rights as the common standard of achievement for all peoples and nations.

Directed by Miquel Galofré and Amanda Sans, Songs of Redemption goes inside the General Penitentiary in Kingston, Jamaica, to document a remarkable programme that seeks to rehabilitate prisoners by allowing them to write, record and perform reggae music.

The film features extraordinarily candid and moving interviews with the inmates in the programme, some serving sentences for crimes as serious as murder. It climaxes with a powerful live concert within the prison.

Preceding Songs of Redemption will be a short fiction film, Passage, winner of a special jury mention at ttff/13. Written and directed by Kareem Mortimer of the Bahamas, Passage tells the story of a group of Haitians, locked in the hold of a fishing vessel, who are being smuggled through Bahamian waters in the hopes of reaching the United States.

While the films have not been produced by Amnesty International, the global human rights organisation is supporting the event as it believes that a critical step towards the realisation of human rights is the promotion of a culture of rights—and debates on themes such as those highlighted in the films will certainly contribute to this aim. Materials highlighting recent work by Amnesty International in the Caribbean region will be available at the event.

The screenings begin at 7.30pm, and doors open at 6.30pm. Space is limited, so please arrive early to ensure seating. Refreshments will be available.

Image: a shot from Songs of Redemption 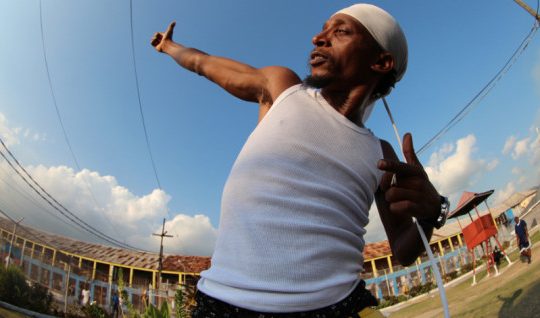