The documentary Dreadlocks Story, directed by Linda Ainouche, about the links between Rastafarianism and Hinduism in Jamaica, had its ttff/15 premiere yesterday. Our blogger, Aurora Herrera, attended the screening.

Dreadlocks Story, the first feature-length film by Dr. Linda Aïnouche, explores the history of Rastafarianism through a previously unexplored prism: hair. It shows the spiritual significance of the much-criticised dreadlocks hairstyle as well as the roots of Rastafari culture, both of which are entangled with the Hindu tradition in Jamaica.

Aïnouche, who is an ethnographic researcher and cultural analyst specialising in ethnic minorities, misunderstood communities and religion, is very interested in understanding the cross-cultural impacts that can emerge between outcast people all over the world.

“The specific reason I decided to make this film, which is an ethnographic film because I am an anthropologist, is because Leonard Howell, the first Rasta, decided to take a name, an Indian name when he was with the Rastafari movement in Jamaica, which is deeply rooted in the Indian culture. I wanted to explore that,” she said.

Aïnouche also sees the film as adding to the canon of research and information on the Indian indentured labourers who came to the Caribbean to work on the plantations.

Aïnouche also explores similarities between the sadhus of India, who also wear their hair in locks and who commune with Shiva through nature, and the Rastafarians of Jamaica.

I thoroughly enjoyed Dreadlocks Story and that I think anyone who is interested in research, history and cultural synergies would really appreciate this film. The subject matter is carefully deconstructed and researched.

One audience member commented on the level of expertise in Aïnouche’s film.

“I liked it a lot and I was very appreciative of Hélène Lee, that she shared her knowledge of such an extensive amount of years of research,” she said.

Another member commended some of the research included.

“I really appreciated the part where [Professor Verene Shepherd] talked about the indentured labourers being welcomed by African people,” she said. “It goes against so much of what we have learned in school about this tension on the plantations between African and Indian people. It was very refreshing to see and hear accounts of African people inviting Indian people into their homes and giving them food because there is [a myth] that we do not get along.”

Aïnouche also commented that she was very surprised at how easy this film has been to make.

“I shot with four different crews, there were no issues and the documentary is very spontaneous and my first feature film and it was so great,” she said. “It was not very difficult to make people comfortable in front of the camera and I love being in the field! Editing was the most difficult part and translating the different languages. I am also please to see that people who do not know about the [Rasta] movement have learned and people who do know learn more.”

As for future plans, Aïnouche is enthusiastic to collaborate.

“I wish I could collaborate on another project with someone else soon!” she said. “I think when you combine ideas and skillsets it’s great!” 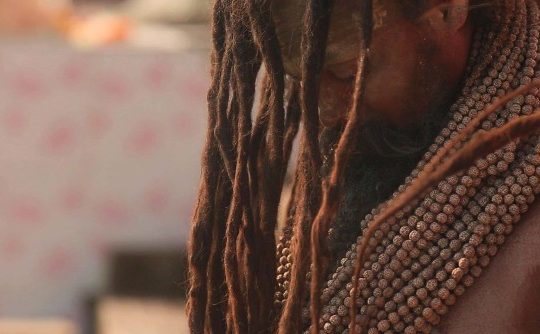