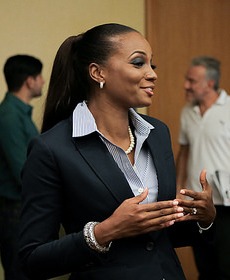 We sat down with Danielle Jones–Hunte-Manager, Corporate Communications, BPTT- our Leading sponsor for ttff/17.

Q: How does your sponsorship of ttff/17 fall in line with your own objectives/mission?

DJH: A nation’s culture is the legacy we leave for future generations. Film is a critical part of the cultural fabric of T&T. For the past 50 years, BP Trinidad and Tobago has supported local arts and culture and thus, supporting the film festival and the thousands that are inspired by the stories shared in same, is but one way we hope to ensure that T&T cherishes and supports its culture for generations to come.

Q: What do you see as the value of the association with the film festival?

DJH: While we can speak about the large return on investment the ttff offers sponsors like BPTT, without question, the greatest value of BPTT’s association is seeing how film and the ttff  have inspired the next generation of filmmakers. Seeing local films and documentaries increase in both number and popularity each year shows that this BPTT investment in culture is paying off – and the nation (and world) is paying attention.

Q: How important is your sponsorship towards the development of a Caribbean film industry, local film-making industry?

DJH: There are hundreds of film in development in our Region. The Film festival and the BPTT sponsored awards that align with same ensure that the industry is developing. This is important to everyone in T&T because this industry can not only contribute to improving the financial climate but to also improving the way our stories, our culture and our people are portrayed to the world.

Q: How do you see the sponsorship industry changing in the next 10 years?

DJH: I think in ten years the T&T film industry will be generating funds rather than needing same and our investment in the ttff would have made this possible.

DJH: We enjoy seeing the nation respond positively to the creative industry in T&T. Our country gets better when we appreciate our culture and support our own. The ttff  creates an opportunity to generate thought, hope and inspiration and that can only help raise society to higher heights.