After successful outdoor events in Chaguaramas, St Augustine, Port-of-Spain and San Fernando, the trinidad+tobago film festival (ttff) brings its second annual Community Cinergy series to a close this Saturday and Sunday with two days of family-oriented activities and films in Tobago, at the Buccoo Integrated Complex.

Community Cinergy combines film screenings and live entertainment in open-air settings, and is sponsored by bpTT. This weekend’s film screenings take place in association with the Healing with Horses Foundation and the Growing Leaders Foundation, and the event is free, for all ages and open to the public.

Things kick off at 5pm on both days with live entertainment by the children of the Yahweh Foundation and a parade by the Healing with Horses Foundation.

Then from 6.30pm on Saturday a package of short children’s films will be screened. The lineup is:

Then on Sunday from 6.30pm the drama Habanastation, directed by Ian Padrón of Cuba, will be screened, in Spanish with English subtitles. The film tells the story of Mayito, the son of a wealthy jazz musician, who imagines all Cubans live as he does, eating chicken every day and playing video games on their Sony PlayStations. When he finds himself lost in a poor neighbourhood one day, however, he realises this is far from the truth, and must come to terms with the class differences that exist in modern-day Cuba.

Habanastation will be preceded by the short film Dis ah We Own?, Roxborough Secondary School’s prize-winning entry in the 2012 Secondary Schools Short Film Festival, and Elspeth Duncan’s Healing with Horses: Love & Magic.

Before and after the films on both days the Tobago Night Market, an initiative of the THA Division of Community Development and Culture, will take place. There will be refreshments as well as crafts and other products on sale, and giveaways from bpTT. Seating is provided in the stands.

Image: a shot from Habanastation 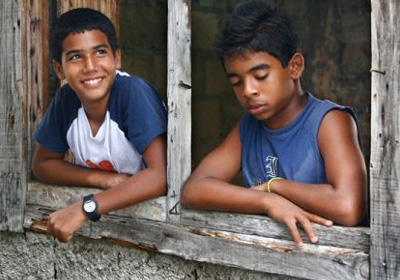