We are thrilled to announce this year’s festival artist, Trinidad and Tobago painter, Che Lovelace. Lovelace’s work will be featured on the ttff/22 poster, our printed guide, buttons and festival signage. His vivid representations of the life, culture and landscape of Trinidad and Tobago demonstrate an intimate knowledge of – and passion for – our country which we share and celebrate every year during the trinidad+tobago film festival. In previous years, the festival has worked with visual artists Christopher Cozier, Eddie Bowen, Peter Doig, Sheena Rose, Mark King , Sabrina Charran and Di-Andre Caprice Davis.

Based in Port of Spain, Trinidad, Che Lovelace’s art is largely inspired by his experience of living and working in Trinidad and Tobago. His paintings are rendered in a vivid assortment of colours – acrylic and dry pigment – on combined board panels. They centre depictions of the dense, highly charged layers of the Trinidadian landscape which Lovelace sees as physical, social and spiritual. The subjects of his paintings emerge from and flow freely between the streets of Port of Spain, the rural natural vegetation, the human form, and the interior of his studio. His practice increasingly includes elements of performance which he absorbs into his painting process.

Che Lovelace was born 1969 in San Fernando, Trinidad and grew up in the East Coast village of Matura. He attended Queen’s Royal College, Port of Spain and received his fine art training at l’Ecole Régionale des Beaux-Arts de la Martinique. He has been a principal collaborator on several arts, Carnival and entertainment projects including the Studiofilmclub and the recently established Friends For The Road J’Ouvert – a traditional Carnival project. Lovelace currently lectures at the University of the West Indies St Augustine, Department of Creative and Festival Arts.

You can learn more about Che and his work by following his beautiful instagram account @chelovelace and read our interview with him here!

Portrait of the artist taken by Brendan Delzin. 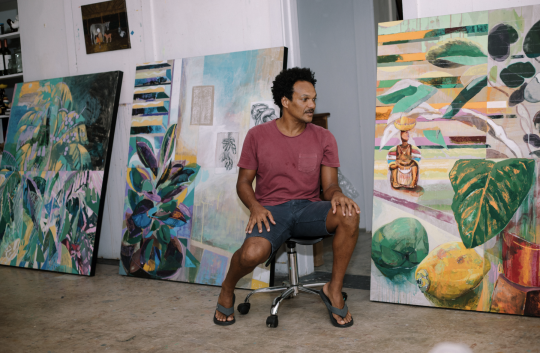