The lads of the Youth Training Centre (YTC) will be in for a Carnival treat as the trinidad+tobago film festival (ttff) screens two movies at the YTC in Arouca, as the Festival’s Carnival Film Series (CFS) comes to its conclusion.

Sponsored by the Trinidad and Tobago Film Company Limited, the CFS is a showcase of Carnival-themed narrative and documentary films. The public screenings take place across the country from 23 January to 05 February, while the YTC screening—which is a closed event—comes off on 8 February.

The two films at the YTC screening are by local filmmakers and both are previous selections of the ttff. The first is Pashan of the Froot, written and directed by Nadissa Haynes. Pashan of the Froot is a hilarious mock documentary about a singer who believes himself to be much more talented and popular than he actually is.

The second film to be screened is No Soca, No Life. Written and directed by Kevin Adams, this is an inspirational film about a young woman, Olivia, from a deprived background. Blessed with an amazing singing voice, Olivia is determined to overcome the obstacles before her and make it as a soca star. Soca Singer Terri Lyons, who plays Olivia, won the award for best actress at the ttff/12 for her performance in the film.

Both Nadissa Haynes and Kevin Adams will be on hand at the screening to introduce their films and engage the lads in question-and-answer sessions afterwards.

This is the second time the ttff will host a screening at YTC, after a successful event there in 2012.

“The YTC screenings reinforce our commitment to using film as an instrument of social transformation,” said Melvina Hazard, the ttff’s Director of Community Development. ”Through these films and Q&A sessions, we hope to inspire the lads towards productive forms of creative expression. We also hope that sometime in the future we will be able to showcase a film made by the lads in our annual festival.”

The YTC has as its main aim the rehabilitation and training of the lads committed to its custody, which would allow them to return to and function beneficially in the society from which, by due process of law, they have been temporarily set apart. To this end the centre has an active and varied programme of activities, including academic study, arts, sports and technical-vocational training.

Image: Penelope Spencer (left) and Terri Lyons in No Soca, No Life 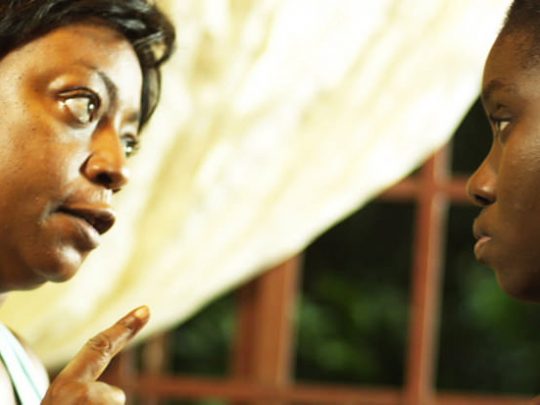