The trinidad+tobago film festival (ttff) and the National Library and Information Systems Authority (Nalis), in association with the Trinidad & Tobago Entertainment Company and North Eleven, are pleased to present the first ever Carnival Film Series (CFS).

Taking place at the National Library, Port of Spain on 27 (6pm to 10pm) and 28 February (7pm to 10pm), and at the Point Fortin Public Library on 3 March (7pm to 10pm), the CFS will be an entertaining three nights of Carnival-themed movies, live music performances and appearances by traditional Carnival characters.

One of the films being shown is the classic Bacchanal Time (1977), written and directed by Kamalo Deen. A comedy that follows the exploits of a couple of top stick-fighters, the film features acting performances by a number of calypsonians including Crazy and Gregory Ballantine, and a soundtrack featuring original songs by Calypso Rose, the Mighty Shadow and others.

Other films include the documentary Soca Power (2007), which follows the fortunes of four soca stars through a Carnival season, and the short Too Young to Soca (1986), a fascinating portrait of a youthful Machel Montano.

In addition to the films, there will be live performances at the National Library by Black Prince, Sheldon Nugget, North West Laventille Cultural Movement, Kimba Sorzano and various traditional Carnival characters. The MC is Black Sage.

Admission to the CFS is $40 at the National Library, and free in Point Fortin. There will be food and drinks on sale, plus door prizes to be won. Limited seating is provided, so you may wish to bring a cushion.

The ttff, which is in its sixth year, is presented by Flow. The Festival receives leading sponsorship from RBC/RBTT, and supporting sponsorship from the Trinidad & Tobago Film Company, the Tourism Development Corporation, the Tobago House of Assembly and the National Gas Company.

For more information, including each night’s entire schedule, visit www.ttfilmfestival.com or www.nalis.gov.tt, or call 621.0709 or 623.6962. 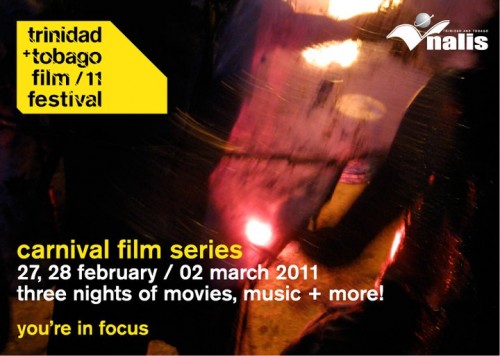