The mid-length documentary Bottom in de Road, directed by Oyetayo Ojoade and Sharon Syriac, had its world premiere on Tuesday at the ttff/15. Our blogger, Aurora Herrera, attended the screening.

Those are all words used to describe Bottom in de Road, a film by Oyetayo Ojoade and his wife Sharon Syriac. The work explores “bottom power”, offering analysis of the female bottom as seen through the gaze of the Caribbean man. The role of the bottom in expressing freedom and as a source of religious controversy are also considered.

The world premiere of this documentary elicited a varying scope of reactions from the viewers.

“Overall it was a bit crass but I didn’t expect so much balance,” one male audience member said. “I expected to be more offended because this society is already a patriarchal, sexist society and you see so much perspective about a woman’s behind everywhere. The Black Venus [Sarah Baartman], and the history that came from her perspective I thought gave more balance. It made the film smarter.”

“It was excellent, I liked how they mixed the humour and it was at the same time serious,” one female audience member said. “Even with the humour there were elements of the serious and a lot of the intellectuals brought out their serious opinion.”

When asked if she found the film offensive in any way, she said that you have to move beyond being offended.

“It’s Bottom in the Road, it has to be misogynistic,” she said. “The director said that it is from the male perspective. That is our culture.”

Ojoade explained his inspiration for the film to the audience saying, “I have got a cross-cultural background; a Trinidadian mother and a Nigerian father. I spent half my life in Nigeria where you see the woman dressed a certain way. They dress in lose clothing that covers their backside. So occasionally you will see the young university student wearing tight fitting jeans and depending on where she goes, she will get harassed. But moving to Trinidad in my adult life, I saw women and young women and girls dressing in revealing clothes exposing the bottom. It was a culture shock for me and that is why I had to do this.”

Oyetayo Ojoade has a BA in Film from the University of the West Indies and is the director of the short documentary films Who Let the Dogs Out? (ttff/08), Shouters and the Control Freak Empire (ttff/10), and co-director of The Madonna Murti (ttff/11), as well as the short fiction film Suck Meh Soucouyant, Suck Meh (ttff/09).

“Because of the sensitivity of the topic and the controversy that it would generate, yes it was a deliberate technique in order to draw the audience in to plug in some very serious issues which we feel should be considered,” Syriac said.

Along with the man on the street, the film featured interviews with Iwer George, Denyse Plummer, Destra Garcia, gender studies expert Gabrielle Hosein, scholar at the University of the West Indies Gordon Rohlehr, and sexologist Dr Giriraj Ramnanan.

One audience member in particular did not appreciate the lengthy discussion and categorisation of female bottoms by a regular man on the street, who was referred to as “the prose version of Iwer George”, by another audience member.

“It was like categorising animals almost,” the said about the cataloguing of female glutei maximi.

The film makes a very weak attempt at balancing the examination of the female derriere with that of male behinds, allotting about six per cent of screen time to the topic.

One audience member commented, “The bit about men not having significant behinds, I wanted to ask, are we in the dark ages? That was unnecessary.”

Another audience member said,” I think this film is fantastic and should go international!”

I think it would be rather interesting to ask if the women featured were these men’s daughters, sisters, girlfriends or wives, if they would still feel this much gusto for the film.

The film is definitely thought-provoking. There are many healthy discourses that can come out of it. For example, there is the question of whether the showing off of the bottom is an act of true freedom and independence or rather the fulfilling of a biological act; where the female attempts to be desirous to the male for him to choose to mate with her, which when stripped down, is basically submission to the male choice and need.

Moreover, this dialogue can also be looked at in the paradigm of colonisation and its social and psychological impact.

As gender studies expert Gabrielle Hosein says in the film, “We have to understand the the obsession, the praise and the adoration of the female bottom in Caribbean culture is not only because female bodies in and of themselves—regardless of their shape and size—are beautiful, but it is because of a long colonial emphasis on the bottoms of African women.”

The film also engenders questions such as: Are women even aware of these concepts as they don their revealing costumes? Do they consider the theories and archetypes associated with a postcolonial society and still make that decision consciously as a means of expressing their freedom, or are they merely following trends and have no idea what their displays truly mean to themselves and others?

One female audience member asked if men realise whether there is a fine line between dressing up for Carnival and looking cute and sexy as opposed to being vulgar. Of course vulgarity is a matter of perspective but the question can also be added to the discourse.

Syriac said, “It took us three years to make this film. He [Ojoade] did all the filming and he followed all of those female bottoms. A lot of the times on the street when he followed women, they didn’t know that their bottoms were being taped, so that it one reason why we didn’t have the women respond because he had to do it undercover. I was not there.”

While I understand that social media has normalised the presence of cameras at every fete, club night and lime, most times, the photographer will ask if a photo or video can be taken. This seems like common courtesy even if filming on the streets. It seemed sort of creepy for Ojoade to do all of this in secret, from the back.

Also, there was a scene with Saucy Pow which was backed by the song Boom Bye Bye, a song by Buju Banton whish is widely regarded as anti-gay. I felt that it was quite offensive.

You can see Bottom in the Road on the following dates: 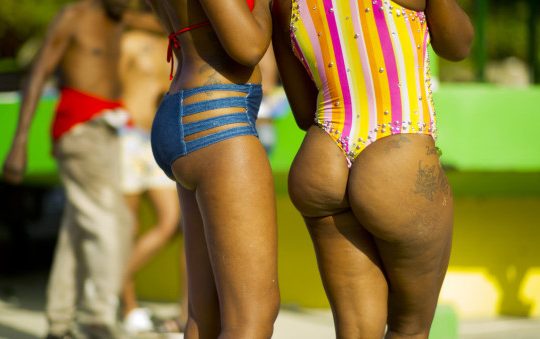