We are in the year 2018 and the world has evolved tremendously. Nevertheless, discrimination of the most basic nature still exists.

The 20 minute documentary, Black Hair, puts reality in our face as Gabriella Bernard, an upcoming international model based in Trinidad, shares her battle with having natural hair. “I live in a world where I am told my black beauty isn’t enough,” Gabriella expressed. She is a young, hardworking model who is willing to do anything to make it in the modelling industry. But she did not expect the industry to want her to tame her identity and to denature her beauty.

Gabriella was a contestant on ‘Caribbean’s Next Top Model’. At this competition she was asked to relax her hair or be eliminated. Gabriella was heart-broken to choose between her hair and her career. At the end, her natural Black Hair was no more. Self-hate overpowered her, she felt ugly and uncomfortable with her relaxed hair.

Thankfully, she went back on the path of re-growing natural black Hair. She placed third in the competition but bigger and better opportunities came her way because of her black hair. She advocated in the film that we live in a world where black beauty traits are “trending on everyone except black people”, but she is proving them wrong as her career is taking off.

This film takes us on an interesting journey where hate becomes love and love becomes hate with an overarching message of eventually finding yourself. As a child Gabriella had thick natural hair that had to be combed daily for school. She hated her hair because it brought her a great deal of pain while combing it. This led to her relaxing her hair which made her felt like a ‘Barbie Doll’. Later on she realizes that relaxed hair was a greater struggle. Gabriella liked her relaxed hair and was complimented by others, but it took a lot of maintenance, chemicals, and artificiality to make her hair relaxed. In her adolescence her curls would grow back prodigiously but she was still displeased by it, as she was trying to embrace the relaxed look.

Later on she began to question herself about the constant cycles and need to relax her hair. These thoughts and questions stuck with her through university as she felt lost and didn’t have a personal brand as a model.

In a bold and possibly risky move, Gabriella cut her relaxed hair and embraced her natural Black Hair. The natural hair that once brought her pain now brought Gabriella something truly amazing; self-discovery, self-love, and self-empowerment. Gabriella was piecing together her self-identity and created her personal brand based on her beautiful Black Hair. But was she willing to risk her Black hair for her modeling career?

This film is a brave effort that adds its voice to a contentious debate taking place all over the world. It’s a cultural, ethnic, aesthetic and workplace debate, taking place in small and large ways in small and large spaces. This film certainly enters boldly into the national conversation on these matters, and gives many people without support a champion to rally around when they decide to wear their hair natural or wear it ‘Black’. 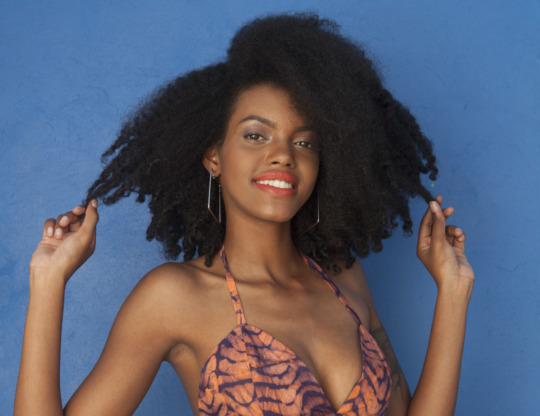