artists use their bodies as a battleground in ‘food for weapons’

Food for Weapons was the featured work at the trinidad + tobago film festival New Media launch this year. It opened on Wednesday September 21. The body of work featured pieces by seven contemporary Venezuelan artists which revealed how they receive, reflect and comment on the connections between violence, power, food and the body.

It has taken me a few days to write this blog because I really wanted time to think about the work and to digest all of the discourses I was exposed at the launch.

I have very close ties with Venezuela, spending my time between there and Trinidad from my teenage years into my early twenties. My family keeps up-to-date on what is happening there, more so because we have loved ones there who are enduring the current situation.

About a month ago, my mother told me about a pastor that she knows, who goes across to Venezuela from Trinidad to take food items for the people. In one of the families he helps, there is a new mother who is too malnourished to produce breast milk so the baby was starving. He scheduled a trip to bring milk and other items to the family. When he arrived, he was told the baby died just the night before.

I have been told that even people in the privileged areas are going hungry. The control of food, medicines, water and the media is used to prevent uprisings and maintain power.

I also listened to conversations amongst my peers about the people that are being advised to leave certain areas on the Trinidadian North Coast because that is where the Venezuelan boats are coming in to exchange weapons for food and the environment is getting increasingly hostile.

The people I heard this from told me not to talk about it too much because it wasn’t safe to repeat.

I connected with Sandra Vivas, the curator of Food for Weapons as she had a similar experience.

“Food for weapons, it’s a rumour, it’s a rumour that everybody here knows but nobody talks about and I didn’t want to talk about it because I didn’t want to put the people out there who gave me the idea,” she said. “It is the link with Trinidad and it is the danger we are now facing here especially as I now have this adopted land.”

Vivas is of Dominican and Venezuelan parentage and currently resides in Dominica. Food for Weapons is her first curatorial effort.

The work of this artist, Deborah Castillo is titled “Marx Palimpsesto”.

“A palimpsesto is a manuscript that has been erased and written over,” Vivas explained. “In her case she is deleting fragments of Marx’s words. She doesn’t write but her writing is in her gesture. She is writing with her body. She made a sculpture of the face of Karl Marx and that is the eraser.”

One of the audience members commented, “To have a group of artists that are not activists or politicians…just artists that have decided to make a statement to emphasize what is reality using just their creativity is amazing.”

“In the current regime, anything that you document becomes extremely polticial,” she said. “So, more than before it is important to record it…the government does not want to the world to see what is happening [in Venezuela].”

Vivas spoke of a recent summit in Margarita where commercial flights were halted and no international press was allowed. It is said that there were platoons on the island staying in camps that apparently “did not even have toilets and the smell of the island was disgusting.”

The piece by Max Provenzano titled “Epistolary” features a man engaging in oral sex with a gun. The work is a comment on the violence in Venezuela and the relationship between submission and power.

“There is this power that this person who is holding the gun has,” Vivas said. “They feel that they can do anything. They are raping you. They are not doing it in an overt way but it is something you are constantly thinking about.”

Vivas included material that was intentionally shocking in the body of work. The piece by performance artist Erika Ordosgoitti is a film of her urinating directly into the camera, which is facing upwards.

“I chose that work because it talks about how women’s bodies are supposed to be.,” Vivas said. “Right now it seems extremely rare if not non-existent to have non shaved pubic hair. Pubic hair has become taboo.”

Vivas went on to comment that the work is about her ability to choose how she will present herself.

“We are bombarded to be a certain way,” Vivas explained. “So she is choosing a different perspective intentionally. She is standing to pee in front of the camera when it is usually men who stand to pee. It’s a power thing.”

In a previous interview Vivas commented that Food for Weapons also refers to the fact that ideas can be seen as food.

“It is a reminder that hunger can be both a dangerous oppressor and the most dramatic motivator for ultimate liberation,” she said. “The artists use their body as an instrument, recognizing it as a battleground where violence is often enacted through hunger, torture or menace, and seek to recreate it as a channel of liberation that is democratic and universal.” 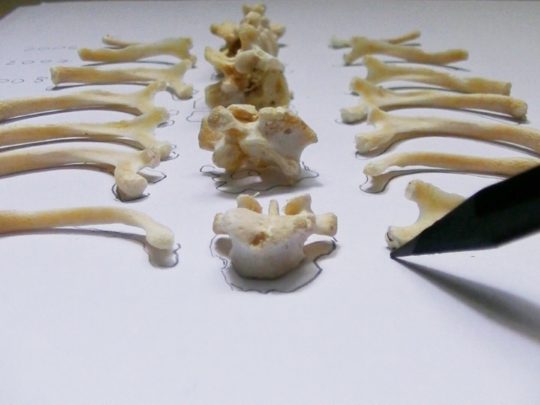