An Exhibition of Trinidad+Tobago Film

Academy for the Performing Arts, Port of Spain

In association with Flow, bpTT and RBC Royal Bank

A highlight of Side by Side will be an exhibition on the history of film in T&T from 1927 (when the first feature film was made here) to 1999. The exhibition will also feature some of the locals who have done pioneering work in the film industry during that time, both at home and internationally. These pioneers will be honoured at a special ceremony to take place during Side by Side. The exhibition will also contain an exhibition of photographs by filmmaker Horace Ové, a display of historic film production equipment from the vaults of the Government Film Unit, a video installation that looks at the work of future pioneers and a screening of the five films selected for the finals of the 50-Second Film Competition. Exhibition materials provided by Paria Publishing, Ray Funk, Roy Rique, Mickey Nivelli, Anthony Maharaj, Kamalo Dean, Annabelle Alcazar, Deborah John, Banyan, Pearl & Dean, Bruce Paddington and GISL. 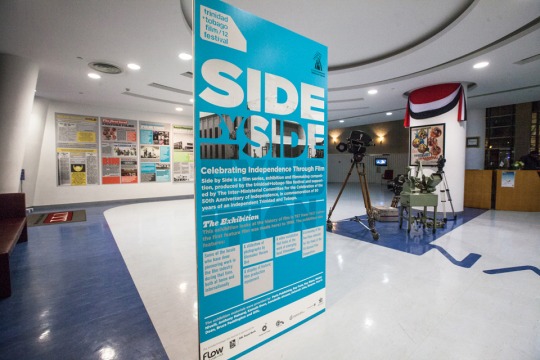