No, that’s not the new boast of the trinidad+tobago film festival (ttff). (And thank goodness for that. We have enough of a challenge programming 70-odd films; imagine trying to programme 300!)

Rather, those are the stats for the Toronto International Film Festival (TIFF), the largest public film festival in the world, and, increasingly, one of the most important.

The 35th edition of TIFF concluded two days ago, and I was privileged to be there for roughly the festival’s first half (September 9 to 14), as a representative of the ttff. I had two main reasons for being at TIFF. The first was to interact with various film industry professionals (filmmakers, distributors, funding agencies et al) for the purpose of establishing links with the ttff. The other was to see what tips I could pick up from the world’s largest film festival that would be useful at ours.

If the way TIFF works can be used as a guide, I am happy to report that the ttff is doing pretty well in terms of how it operates. Of course our festival functions on a much smaller scale, but the basics–how a film festival fundamentally works–are the same. Films need to be chosen for screening, a schedule has to be programmed, filmmakers have to be invited, and so on.

One of the nice things about TIFF is that while it is a large festival, it doesn’t feel that way. All of the events take place in Toronto’s entertainment district, within walking distance of each other, and there are enough different things happening at any one time that no one event gets too crowded. Of course, that means that sometimes two events you’d like to go to–a film screening and a conversation with a filmmaker, say–take place at the same time, but a film festival, especially one showing 300 films, is nothing if it isn’t about choices. (“What will you see?” was the tagline of this year’s TIFF.) 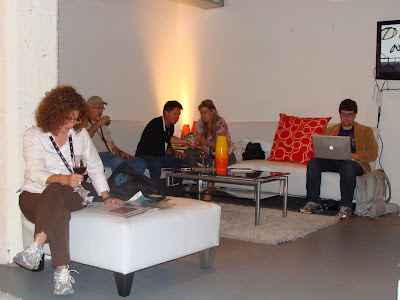 Relaxing in the filmmakers’ lounge

The place to be between events was the filmmakers’ lounge. That was where you came to relax, have a cup of coffee, check your e-mail, and, perhaps most importantly, network. Most networking, not surprisingly, got done every afternoon during happy hour, when the beer and wine were free, and there were complimentary hors d’oeuvres on offer. 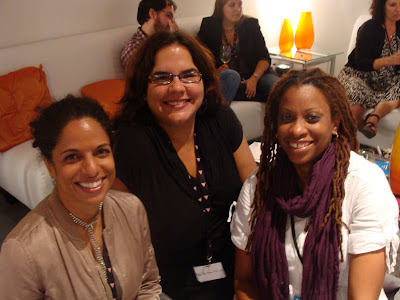 Also taking place at the filmmakers’ lounge were a few discussion panels, on such topics as funding for independent filmmakers and documentary film production. The event I most enjoyed, however, was a completely frivolous session hosted by renowned film critic (and one of my heroes), Roger Ebert, entitled Roger Ebert’s Twitter Showdown. This entailed Ebert making a film-related statement, after which a panel of five noted film tweeters (including the actor Rainn Wilson, of the US version of The Office) would have a minute to tweet a response. (Sample statement/response: Ebert: “3D is an abomination on the face of modern cinema.” Wilson: “Katherine Heigel is an abomination on the face of modern cinema.”) The audience then got to vote on whose response was the best. This went on for a while, until Ebert called an end to proceedings and a winner was announced. Not surprisingly, Rainn Wilson won. 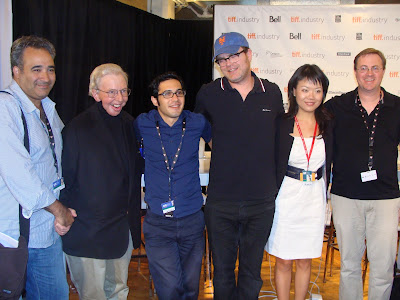 The big news at TIFF this year was the opening of the festival’s new home, the Bell Lightbox. This impressive six-storey building has a number of features, including multiple screening theatres, an exhibition space, and two restaurants. To celebrate the opening of the Lightbox, TIFF launched Essential Cinema, a programme of the 100 greatest films of all time, as voted on by the TIFF programmers and patrons. 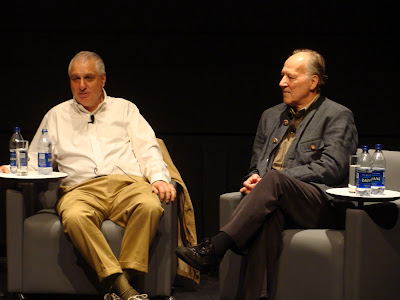 Filmmakers Errol Morris and Werner Herzog in conversation at the Lightbox 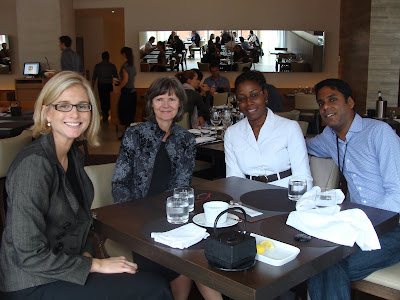 Having lunch at the Lightbox with Charlene McLaughlin, from left, and Deborah Dexter, both of the Brand Marketing division of RBC, and Nneka Luke, Regional Manager, Corporate Communications, RBC/RBTT. RBC is one of the main sponsors of TIFF; RBC/RBTT is a supporting sponsor of the ttff

Talking of films, what’s a film festival without them? There was no way I was going to get to see anywhere near the number of films I would have liked, but those I did see I enjoyed, for the most part. Far and away the most impressive film I saw was the western Meek’s Cutoff, the new film by US filmmaker Kelly Reichardt (Wendy and Lucy). Set in the mid-19th century, and starring Michelle Williams, the film tells the story of a group of pioneers who get lost on the wagon trail heading out west. To me, the film is no less than an allegory on the history of the United States.

Other films I enjoyed were a powerful French drama, Of Gods and Men; the enchanting animated feature The Illusionist (by Sylvain Chomet, of The Triplets of Belleville fame); and Stephen Frears’ comedy Tamara Drewe, based on Posy Simmonds’ graphic-novel update of Thomas Hardy’s Far From the Madding Crowd. I was also impressed by Dhobi Ghat, a debut drama by a young Indian filmmaker, Kiran Rao.

When I left Toronto, the festival was now getting into high gear. Disappointed as I was to leave, however, I was happy about the reason I was leaving: there was a certain other film festival I had to go and see about. 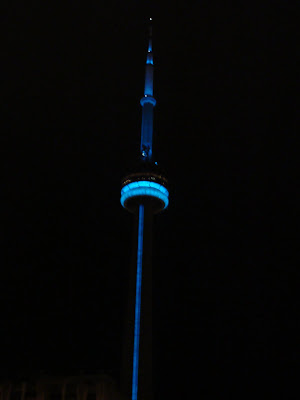