As it gears up for a year of outdoor cinema, training for filmmakers and of course the big Festival in September, the trinidad+tobago film festival’s first offering for 2017 is its Carnival Film Series—a showcase of Carnival-themed movies and other film-related events, from 05-11 February, sponsored by bpTT.

This year the focus is on classic films, with three evenings of free, outdoor film screenings beginning with Bacchanal Time at Constantine Park, Macoya, followed by Black Orpheus at Big Black Box, Woodbrook, and Horace Ove’s King Carnival at the NALIS Amphitheatre, Port of Spain. King Carnival will be followed by a panel discussion.

All screenings start at 7pm. 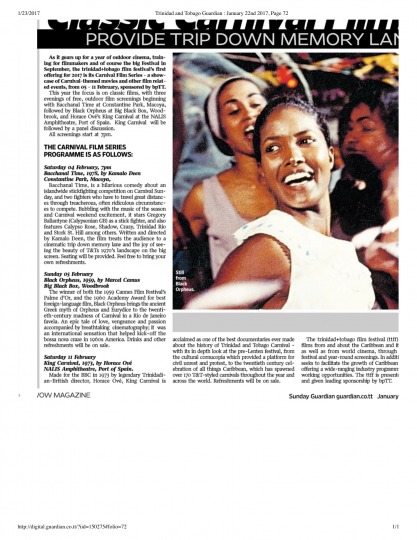