Submit your film to the trinidad+tobago film festival

FILMMAKERS ARE invited to submit material for screening at the 12th edition of the trinidad+tobago film festival (ttff) by the 15 May. A rough cut will be considered.

The ttff celebrates films from and about the Caribbean and its diaspora, as well as from world cinema, through an annual festival and year-round screenings. This year it will be held from 19 – 26 September 2017.

In addition, the ttff seeks to facilitate the growth of Caribbean cinema by offering a wide-ranging industry programme and networking opportunities.

“The importance of screening films from the Caribbean diaspora, during the tt film festival, cannot be over stated. They contribute to the multi-layered notions of what it means to be Caribbean, as well as provide a focal point for Caribbean connectivity between those of us ‘at home’ and ‘abroad’. 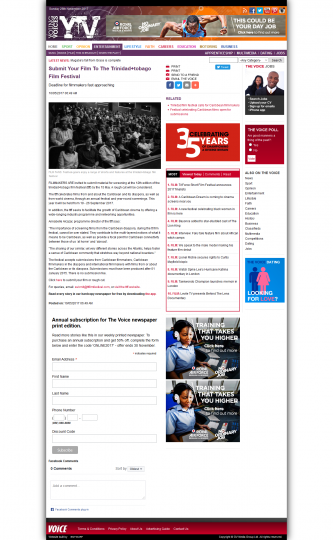