T&T will present four feature-length films and over 34 short and experimental films during the T&T Film Festival (TTFF) from September 19-26.

One of those films, a movie adaptation of Michael Anthony’s Green Days by the River directed by Michael Mooleedhar and Christian James, will be the opening night film.

In a release last week, the festival announced most of its Caribbean line-up, which includes several award-winning and critically acclaimed films.

The festival will be held at MovieTowne Port-of-Spain, San Fernando and Tobago, as well as at the University of the West Indies, St Augustine.

The films from some of the Caribbean’s finest film makers include, from the Dominican Republic, Jose Maria Cabral’s Carpinteros (Woodpeckers), a high-octane, no-holds barred movie about a forbidden relationship conducted through prison bars and across the 200 yards of empty space dividing the male and female prisons in Santo Domingo. Carpinteros, which played at the Sundance Film Festival, has been described by critics as a “raw, intriguing and energetic blend of the tough and the tender.” 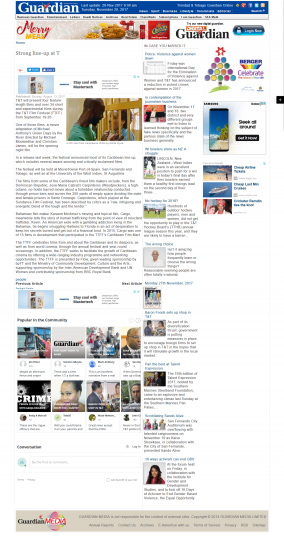