I have seen many films from around the world at the Trinidad and Tobago Film Festival but this was my very first Costa Rican film and I thoroughly enjoyed it. What struck me most about the 2015 film ‘Presos’ or ‘Imprisoned’ directed by Esteban Ramirez, was how universally relatable its story is. Who doesn’t feel trapped at times in life? Be it at work, school, in family affairs or in romantic relationships.

Nineteen year-old Victoria (played by actress Natalia Arias) has that sort of face that straddles that thin line between schoolgirl cuteness and burgeoning womanly sex appeal. She is young, but has been a committed relationship with Emanuel, a well to do businessman who showers her with affection but is often too shy for the dance floor.

Victoria’s new job leads her to form a growing friendship over the phone with one of her boss’s associates Jason, who happens to be serving a prison sentence for a crime he certainly committed. This new bond with Jason who incidentally is an outstanding dancer, slowly begins to unravel Victoria’s world and she begins to question the direction of her life and if she really wants to marry and settle down with her beau.

‘Presos’ is also deeply rooted in family affairs; we encounter how Victoria’s decisions about her love life affect her mother’s depression. At the same time her conundrums put into context a grudge she has held with her father for abandoning her mother for another woman some years ago, only to return to the family.

The film culminates with a jarring scene of Victoria, waiting anxiously in the prisoner visitors’ line confronted with the idea of committing a crime for love or to pursue the almost mundane possibility of returning to her old life. She may now understand her father’s past decisions with a tinge of empathy being faced with her own present predicaments. 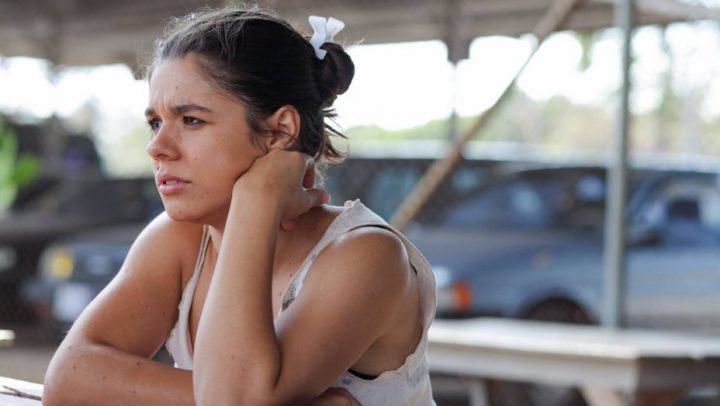 The film is remarkably well cast and edited, and you really believe that Victoria is as naïve as Jason is cunning. And, of course, some quite exhilarating dance scenes are expertly interwoven into the film.

‘Presos’ is the third feature length film from Esteban Ramirez and was chosen as Costa Rica’s submission to the 88th Academy Awards in 2015, an honour the director also held with his debut film ‘Caribe’ in 2005. It is a wonderful achievement from the growing Central American film industry and can influence Caribbean cinema in approaching the telling of stories from universal themes. I highly recommend you see “Presos” because at the heart of this film is a storyline that confronts us all. Do we choose comforts over passions, do we play it safe or take a risk, or is it that no matter what we always end up trapped in a prison of our o