The Weekend by Ryan Nanton

If your fancies are tickled when sheer bacchanal unfolds, this thirty minute short film is a must see! Be sure to walk with a napkin or two, as this exciting, drama-filled rom-com, The Weekend, explores on several levels, the contemporary issues of family life and relationships in Trinidad and Tobago.

From the onset, viewers are confronted with the struggles of being gay as well as the disputes that usually come from promiscuity or infidelity in any relationship. What adds to the energy of the storyline however, is the diversity of the characters, both in their personalities and in their ethnicities. The melting pot of Trinidad and Tobago is obliquely celebrated, as the film takes an open minded, liberal approach to issues that are still very thorny in “outwardly” conservative Trinidad and Tobago

At least, this appears to be what director, Sean Hodgkinson, attempts to do in the comedy laden scenes which help to mellow out what is still quite a homophobic society. Perhaps, Hodgkinson subscribes to the view that it is difficult to discriminate while having a good time and laughing.

Tucked away in the north coast of Blanchisseuse, the villa and its setting, evidently fuels the desires of those bent on mischief during the weekend to celebrate Greg’s birthday. Moreover, aptly done by main bachannalist, Ganesh, conflict is injected in almost all scenes with his unique delivery of gossip and confusion. This leads to those living secretive double lives to be exposed hilariously and poignantly.

Belly stitches are inevitable, as characters, Claire, Christina and Heather all fall victim to Ganesh’s gimmickry and manipulation. Insomuch as conflict resolution goes, a voice of reason is heard among the madness which leads to an ending that you would not have predicted.  If you don’t like getting caught up in drama in your real life, but still like hearing and seeing other people’s drama, “The Weekend” will leave you feeling like you’re in the inner circle of all the bacchanal. 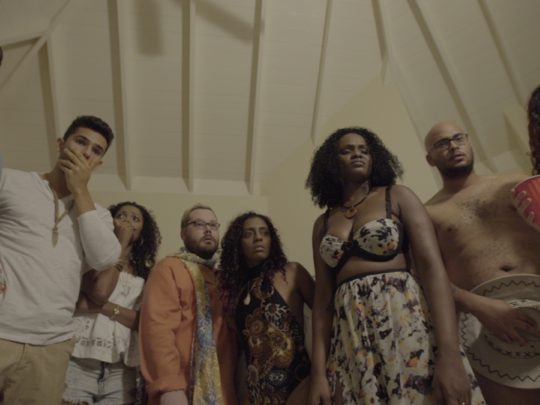