The Violin Teacher by Natasha Twum

Directed by Sérgio Machado, The Violin Teacher is a touching drama set in contemporary Brazil that revolves around Laerte (Lázaro Ramos), a middle aged, talented violinist who, after failing at his audition with the São Paulo Symphony Orchestra, sees his bills and debts piling up. An offer to teach a high school violin class in São Paulo’s notorious Heliopolis neighborhood cannot be turned down as he is struggling to make ends meet. This is not an easy task especially with his intense, perfectionist nature but the transforming power of music and the friendship which eventually forms between the teacher and the students make it possible for things to change.

However, trouble threatens some of the boys in the band as they are drawn to an easier life. This rough life leaves a tragic mark on his class. At the beginning of the film the story seems as predictable as its title, but then the director skillfully reminds us of present day Brazil and the hardships and dangers of living there.

This film seeks to bring into our experience a lifelong lesson that too many people learn the hard way; for every action there is a consequence, whether it is negative or positive. Laerte’s tries to choose a positive path for himself. His way of dealing with his pain and disappointment leads to him impacting the lives of many children for the better.

The film contains a remarkable level of violence yet never establishes a tone that would make it seem truly shocking, or even to a perverse degree, comic. For sometimes in this film, the characters extract light moments from the dimness that surrounds them; which strikes a life affirming note in the hearts of the audience.

The Violin Teacher is a winner. It is a crowd-pleaser with a conscience. 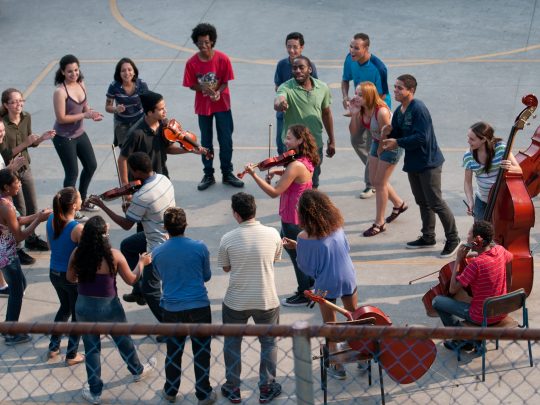