Paddlin’ Spirit  explores the beautiful, yet highly controversial art work of Jamaican artist, Laura Facey, who uses her sculptures as a means of healing herself of personal trauma, while discussing the abuse endured by Afro-Jamaicans during slavery, and the  ill-treatment of women throughout the Caribbean’s difficult history.

The film portrays amazing, larger-than-life designs, while introducing us to Facey as an individual. This short documentary, lasting only 26 minutes, manages to delve into considerable depth, as director Amanda Sans skilfully uses the striking art work to tell the story.

This documentary is an excellent depiction of how one woman’s pain is transformed into art, and how she empathises so deeply with the suffering of the enslaved in Jamaica. Nevertheless, Facey’s work has, at times, received severe criticism. There are those who feel that she had no place expressing these immense feelings for the  enslaved, since she is not black. As a black woman myself, I find this criticism unfounded, and to a degree, unwarranted. Part of what the documentary does, is explore the difference between nationality and race. And also the territorial nature of suffering and victimhood. But what is remarkable, is how Facey shows determination to make her claim to Jamaican history as a Jamaican, and not as a Jamaican of a particular colour or race. She shows, in her work, that it is not race that matters, but authenticity of feeling and affinity.

I have travelled to Jamaica, and had the pleasure of  viewing one of her most controversial pieces entitled “Redemption Song”, which features two naked black bodies, one male and one female located at the front of a park in New Kingston. Although the artwork was condemned by some, I applaud Facey’s depiction of what she considered to be a free man and woman; we are born naked.  Children, particularly in the Caribbean often run around naked, we see it as freedom. We do not judge it as anything sexual because, like “Redemption Song”, it is not.

I enjoyed the film, as a woman of African descent who hails from the Caribbean, Facey made me feel proud to be who I am and to claim our Caribbean history.This film will appeal to many audiences due to its many layers and its raw discussion of history, complexity, and truth. While some may feel that it was too personal, others will be moved to a new understanding of themselves, and of the artist, by hearing truth spoken so eloquently. 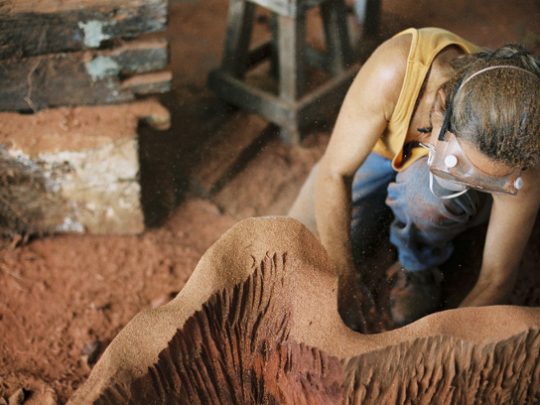