Lipstick Under My Burkha by Kamini Ramlochan

Lipstick Under My Burqa is an unconventional, highly controversial Hindi language work of art. This is the second feature film of director Alankrita Shrivastava; it was initially denied release in its place of origin because of censorship issues, however, her film has already garnered ten awards at several international film festivals.

The setting is in modern day Bhopal, central India. The scene opens with narration of the tantalizing tale of a lustful character named Rosy. This sultry narration serves as the backdrop to the riveting story of four women, each at a different stage in life but all sharing one common quest.

Rihanna, a young beautiful Muslim, graces the screen, hidden behind her burqa. She is wandering around in what appears to be an “American styled” cosmetic store and a red lipstick captures her attention. Rihanna quickly hurries out, lipstick in tow, to a ladies room, where she stuffs both her burqa and her inhibitions as a Muslim woman into her backpack. Rihanna, youthful and vibrant, is roaring with rebellion. All she wants is to discover her femininity. But this is patriarchal India.

Leela, betrothed to a chaste Hindu man, is a beautician who makes no excuses for her amorous appetite with her photographer Muslim boyfriend. An expert subject in front of the camera, she is the driving force behind a business idea she believes has immense potential. Leela is unafraid of risks and unashamed of who she is.  But there is little if any space for Leela’s spunk and prowess. And this is restricted India….. restricted and stifling for many women.

Shirin is the epitome of the typical, devoted Indian wife. Superwoman by day, she is armed with her homemaking abilities, natural maternal patience and superb sales skills at her secret job. Sexual object by night, she is pounded beneath the weight of submission by her husband, reduced to a mere fragment of her true self. Unbeknownst to her, but soon to be revealed, she can lift equal or more weight than any male counterpart. But this is gender biased India…and women are only just women.

Usha-Ji, is in her mid-fifties, widowed and looked upon by her extended family as a revered member and head of the family property. She is highly sought after for final family decisions. But in the comfort of her bed, she reads steamy romance novels, and slowly finds the courage to embrace her femininity and sexuality. Usha is looking beyond the confines of religion, tradition and societal expectations. A need that eluded her in her youth is beckoning now in her early silver streaked prime. It is alive, breathing and yearning, and on the brink of heated explosion.

But this is conservative India.

In a highly anticipated climax, Rehanna, Leela, Shirin and Usha, all struck down by a society unaccepting of female liberation and deeply steeped in religion, lift their burqas of constraint and apply dreams of a red lipstick. Because while Rosy, the narrator, may have misled them, she gave them the courage to dream! 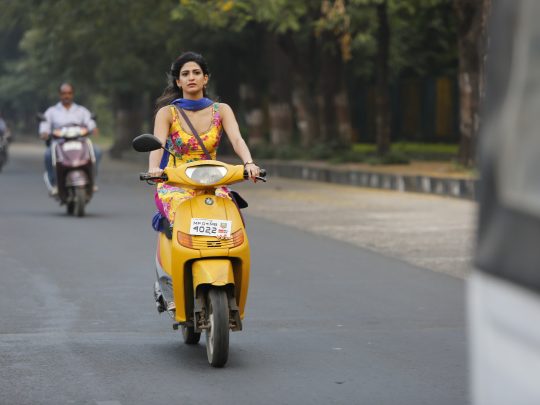