Venezuelan filmmaker Jorge Thielen Armand’s movie La Soledad (Desolation) is about a house that is crumbling, a family that is falling apart, a country that is slowly dying. The plot follows Jose (Jose Dolores Lopez) as he seeks respite for himself and his family from the economic crisis that has befallen his nation. There is an other-worldy feel to the film as it seems to find itself caught between reality and fiction. The crumbling house, which is so central it’s like a major character in the story, was in fact owned by the director’s family. Almost bizarrely, the story is re-enacted by the real life participants – thus blurring the lines between documentary and fiction. Venezuela is very much in ruin. It’s art imitating life imitating art at its very best.

I found myself intrigued by the way three generations of Venezuelan women were portrayed. We have Jose’s grandmother, Rosina (Maria Agamez Palomino), his wife Marley (Marley Alvillares) and his young daughter, Adri (Adrializ Lopez). Rosina is a former maid to the house, and the pillar of the family. However, as with the house, Rosina is also falling apart physically, gravely in need of medicine. Marley is desperate to find a way out, looking beyond the borders of Venezuela for a solution. The adorable Adri is oblivious to the weight of the economic turmoil. She asks her father for milk. He replies, “the cows are on vacation”. Sometimes all one can do is smile through the tears.

This is the first feature film from the director, Armand, and he displays great assurance in his craft. La Soledad relies heavily on the use of symbolism and visual storytelling. Roman Polanski’s The Pianist seems to be a significant influence on Armand. There is also a supernatural element to the film that is paid off by clever and subtle foreshadowing. Each line of dialogue is carefully crafted and it shows.

Cinematographer Rodrigo Michaelangeli also does an exceptional job. There is a bleak, hollow honesty with each shot; characters often find themselves lost within a wilderness of rubble and debris. Scenes take their time, lingering to the point of making the viewer feel its weight. We see the fear and desperation in Jose’s eyes as he searches for food, medicine and money for his family. It is a slow burn of a film, but one whose flames sear into the soul.

La Soledad is truly a bleak but honest reflection of Venezuela that needs to be seen. And seen again. 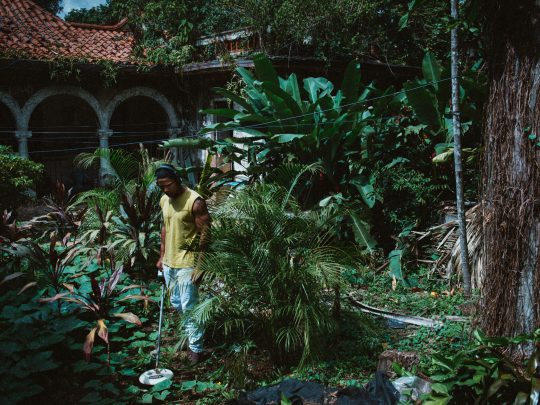